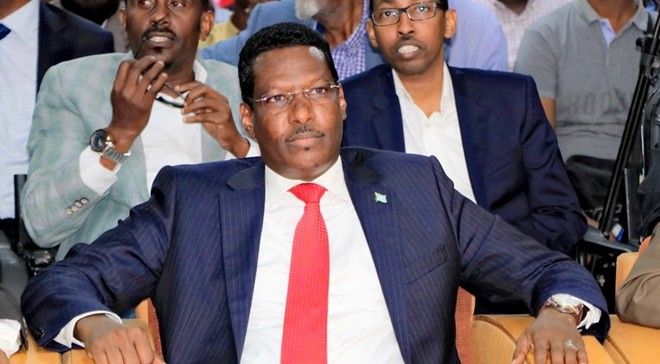 MOGADISHU, Somalia - Ahmed Abdi Kaariye who is popularly known as [Qoor-Qoor], an FGS-backed candidate, has on Sunday won Galmadug presidential polls, the electoral commission announced, amid political chaos in the region.

Of the 89-member parliament, Mr. Qoor-Qoor, a former State Minister for Public Works, garnered 66 votes to seal a historic victory which perhaps may be subject to post-election dialogue.

Four candidates had participated in the polls, which have been marred with delays, withdrawals and alleged manipulation from the federal government.

Sunday's polls could mark the beginning of endless political wrangles within the state, which could culminate in a serious humanitarian crisis.

What other candidates scored

The polls had been scheduled for January 30th but had to be postponed following internal wrangles and lack of preparedness, local media said.

Initially, the elections had been scheduled for December last year but a political standoff on the model of picking MPs delayed the process.

Galmadug polls have been married with anxiety and confusions for several months now, including delaying of MPs elections, local media reported.

Already, outgoing president Ahmed Dualle has termed the process "inconsequential", adding that "my term is not yet over".

The state's polls were closely monitored by international partners, who have already warned about the protracted political standoff.

For inclusivity, the partners warned last week, "dialogue and negotiations" were necessary so that "everybody would feel involved"

President Mohamed Farmajo has been dragged to the chaos eclipsing the process, with his hand evident through the deployment of SNA troops.

At a press conference on Saturday, Forum for National Parties [FNP] warned against using the troops during the Sunday process.

Sharif Sheikh Ahmed, the former Somalia president, said that "the fragile situation at Galmadug must be taken seriously. There is no need of sending soldiers there."

His sentiments were backed by Hassan Sheikh Mohamud, another former President, who accused the state of planning to manipulate the outcome to opposition's detriment.

Villa Somalia has remained tight-lipped about the allegations, even though its been involved in the preparation process.

Before Sunday process, moderate Islamist group ASWJ has termed the process "null and void", calling for a more inclusive approach.

Last week, the group inaugurated a 69-member assembly, electing a parallel government much to the displeasure of Somalia's international partners.

In a statement, the partners said: "The polls must be inclusive and must embrace the spirit of dialogue for the sake of unity and stability in Galmadug."

Sheikh Mohamed Shakir was unanimously picked as the president by the 69 MPs, further complicating the situation.

And the Sufi group boycotted Sunday's polls, signifying a protracted political quagmire in the region which has struggled with political instability.

How did we arrive at the stalemate?

Even after an unprecedented delay of polls which were expected in December last year, the state went on to pick 89 MPs after a contested dialogue.

In the negotiated outcome, the Sufi group was allocated 20 seats in parliament, but it later dismissed the offer, accusing FGS of interference.

However, the MPs went on to pick Dr. Nur Ga'al, an advisor to Somalia PM Hassan Khaire, as the speaker of the assembly a fortnight ago.

But despite setting January 30th as the date for polls, a section of candidates threatened to boycott the outcome, pointing at the divisions within NIEC.

With FGS blamed for bulldozing the process and the subsequent withdrawal of ASWJ, the Galmadug political crisis may, after all, persist even after polls.

Despite the outright differences emerging before and after the polls, the United States insisted that "we are watching the process".

Donald Yamamoto, the US ambassador to Somalia, added that "We call for everyone to refrain threats of violence and continue to participate in peaceful dialogue."

But the winner, who has already been lambasted as a "project" by Villa Somalia, will have to unite warring factions for stability.

Among those he will have to immediately reach out to are the ASWJ group and outgoing president Ahmed Dualle, who opposed Sunday's polls.

The two factions have frequently subjected the state to endless politicking, coupled with ultimatums and threats.

While the victory could be ascertained by the international community, the opposition could also reject the outcome, further derailing efforts to promote stability in the region.