Somalia: Galmudug leader flees his residence amid bid to oust him 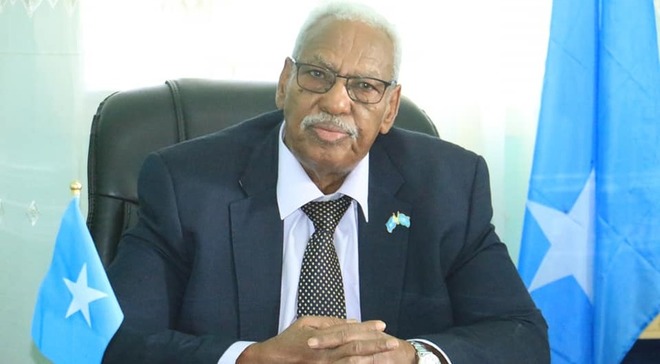 MOGADISHU, Somalia – The leader of Galmudug State in central Somalia, Ahmed Dualle Geelle Haaf fled his residence in Dhusamareb on Sunday after, under genuine pressure by the Federal Government of Somalia, Garowe Online reports.

Reports from the regional state indicate that president Haaf has arrived in Godinlabe, a village located in the outskirts of the town as he and other senior Galmudug officials are on their way to Galkacyo through his former base, Adado town.

Heavily armed soldiers led by state finance minister Said Siyad have managed to sneak Haaf out of his residence in the regional state capital, where Somalia’s Minister of Interior is holding talks with Ahlu Sunna leadership since last Friday.

Haaf may resettle his residence in the Galmudug-administered southern Galkayo town.

The development comes as Somali PM Hassan Ali Khaire is likely to arrive in Dhusamareb, to scale up ongoing efforts to hold Galmudug state presidential election next month as Haaf’s 4-year mandate expires by July 4.

Haaf and his chief minister Shakir earlier said this year that their administration’s term would end in 2021, starting from the union agreement between Galmudug and Ahlu Sunna late 2017 meant a new full term would start then.

Multiple sources in Mogadishu told Garowe Online that the Federal Government reached a secret deal with Ahlu Sunna leadership that could lead the removal of Haaf and install a new administration in Galmudug state.

Galmudug parliament is currently made up of two factions; one based in Dhusamareb previously allied to Haaf and Shakir while the other one is based in Adado chaired by speaker Ali Asir.

In the past, the regional leader has repeatedly accused the Somali Federal Government of a calculated move to depose him, warning the bid could destabilize the country which is now trying to recover from two decades of conflict.