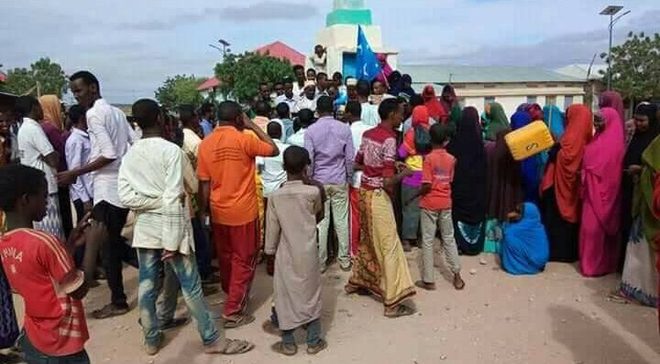 GARBAHAREY, Somalia - The Federal Government of Somalia has been accused of not contributing to political stability in Gedo region in the wake of further tension between locals and Jubaland State, Garowe Online reports.

In the region's capital, Garbaharey, hundreds took to the streets on Friday to protest against the arrival of a ministerial delegation led by Jubaland's Minister of Planning and Int'l cooperation, Aden Ibrahim Aw Hersi.

Hersi has suffered a slight injury after being hit in the head with a stone thrown by angry demonstrators attacked the state delegation in the city, forcing his security guards to fire in the air to disperse the mob.

The latest reports indicate that the phone lines in the town are down due to the escalating unrest. No casualties have been reported since the breakout of the anti-Jubaland protests.

The turmoil comes amid strained relations between the Government in Mogadishu and Jubbaland over the appointment of a new commander for armed forces in Jubba and Gedo regions under the Somali Federal State.

The minister described the rally as 'politically motivated', declining to reveal who is fuelling the violence. He has expressed hope to resolve the crises through dialogue as his delegation is trying to hold talks with local elders.

Last Month, a plane carrying a newly appointed commander of the 43rd division General Ali Bogmadow was turned back from Kismayo Airport as relations are at the lowest point since the start of the Qatar-Gulf crisis.

The State President, Ahmed Madobe said the Federal Government appointed the army commander without consultations with his administration, prompting to take the decision to send him back to Mogadishu hastily.

Villa Somalia and its former Chief of Staff, Fahad Yasin who was recently appointed as the deputy director of National Intelligence and Security Agency [NISA] is said to be working on a plan for 'leadership change' in the Jubaland.