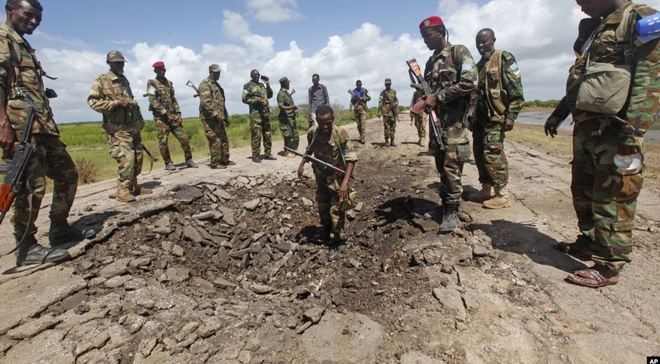 KISMAYO, Somalia - The governor of fragile Ras Kamboni district, also referred to as a District Commissioner, died on Wednesday morning, multiple sources confirmed, in an attack that targeted KDF troops in Somalia.

Abdullahi Diriye died on the spot when his vehicle drove on a landmine which gas been planted by Al-Shabaab militants, who had been fighting to reclaim the town which was liberated by KDF and Ras Kamboni Brigade in 2011.

His two bodyguards and a driver also succumbed to injuries after the Improvised Explosive Device [IED] explosion, around 8 kilometers from Raskamboni town in Lower Jubba, authorities said.

It is not clear where the official was traveling to but his convoy was accorded Kenya Defense Forces [KDF] protection, with several soldiers also sustaining injuries during the attack.

Officers from Dhobley town in Jubba also confirmed deaths to VOA, adding that investigations are still ongoing to establish the motive of the attack, police said.

Ras Kamboni falls under the Southern Sector of AMISOM which is under the surveillance of the KDF troops, who man Sectors II and III of Jubaland, which is a special buffer zone for Kenya in Al-Shabaab war.

But in their friendly media sites, Al-Shabaab said the attack "targeted occupational KDF" forces, insisting that "we shall fight them gallantly until they quit Muslim land".

The Somalia-based militants also claimed that their KDF troops who were accompanying the governor died in the explosion, although officials in Somalia did not immediately confirm or deny the reports.

KDF has played a critical role in establishing a functional government in Jubaland, which is run by Ahmed Madobe, the former Ras Kamboni Brigade commander.

Madobe, who has been at loggerheads with the federal government of Somalia, played an integral role in the capture of Dhobley, Afmadow and Kismayo towns, which were once Al-Shabaab terror hotbeds for many years.

Last week, KDF helped to establish the first army base for Somali National Army [SNA], a significant move towards the anticipated exit from Somalia in 2021, a decade after the incursion under Linda Nchi Operation.

Despite liberating many towns, KDF has also suffered numerous setbacks including the death of over 300 troops in El-Adde and Kulbiyow army bases in 2016 and 2017 respectively.

More often than not, the militants have also targeted officials, whether leaning towards federal government or regional states, as they struggle to topple the fragile UN-backed administration in Mogadishu.

But the militants have significantly lost their territories in central and southern Somalia, due to frequent US raids, which hit record 31 airstrikes within three months during the capture of Janaale town in Lower Shebelle last week.

There are about 7,000 active Al-Shabaab fighters in Somalia, but the militants have been drastically degraded by the allied military, which is keen to establish a functional government in Somalia.

Ras Kamboni almost neighbors Kenya to the South in Lamu, not far from the US Naval Base, which was raided by the militants early this year, leaving three Americans dead.

Almost a week ago, the KDF troops also killed 12 militants in Lamu, within the perilous Boni Forest, capturing one alive for interrogation, officials in Nairobi confirmed.