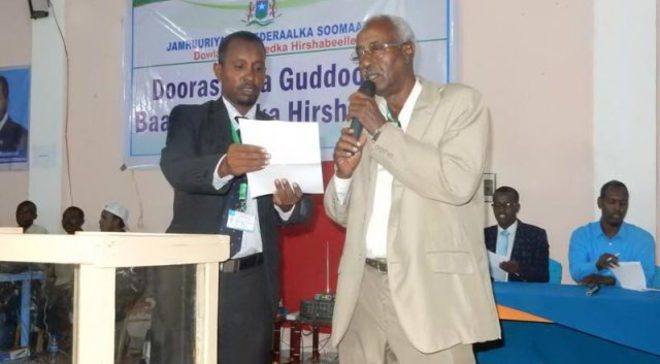 MOGADISHU, Somalia - Unidentified assailants in Mogadishu have gunned down a Somali elder, the latest in a string of targeted killings against electoral delegates, Garowe Online reports.

Reports said that armed men killed the elder who is identified as Ahmed Dhoore outside a mosque in Hiliwaa district in Mogadishu.

The late elder was shot dead as he walked out of a mosque on his way to his residence on Wednesday evening, police said.

Dhoore was among the electoral delegates who picked the Federal MPs of the new Somali parliament in Adado town, the interim seat of Galmudug state of Somalia.

However, no group has claimed responsibility for the assassination of the traditional elder, but Somali Police said they investigating into the reasons behind the murder.

The Al Qaeda-linked militant group Al Shabaab has earlier vowed to disrupt the  Somali electoral process, and intensified attacks in the capital Mogadishu in the past weeks.

So far over 3 delegates were reported killed by unknown assailants following parliamentary elections in the regional states.

Last Tuesday, Somalia has sworn in 284 MPs to form its 10th parliament, despite concerns voiced by the international community over election fraud that marred the integrity of the electoral process.