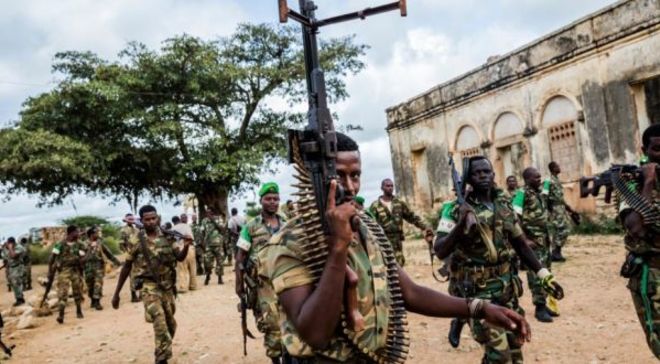 BAIDOA, Somalia- A heavy gunfight between Al Shabaab fighters and Somali National Army has erupted in Monday in the outskirts of Baidoa town, the interim capital of Southwest state, Garowe Online reports.

Residents say the fighting broke out when the Islamic militants armed with machine guns and rocked propelled grenades attacked Somali military bases outside Daynunay area, about 20 km away from Baidoa.

Southwest officials said Somali forces and Ethiopian troops of AMISOM contingent fought to hold off the ambush assault from Al Shabaab, and killed at least seven militants during the counter-attack.

They said the battle near Daynunay town has lasted more than 30 minutes as the allied forces have overpowered the Al Qaida-inspired Al Shabaab militants. Several soldiers were also killed in the attack.

In a statement posted on its affiliated websites, the Al Shabaab militants said they used heavy and small weapons to attack the army bases manned by the AMISOM and Somali soldiers.

Al Shabaab, which once controlled swathes of south and central Somalia, is fighting to overthrow the internationally-backed Federal government in Mogadishu.