Somalia: HirShabelle leader in trouble as MPs file motion against him 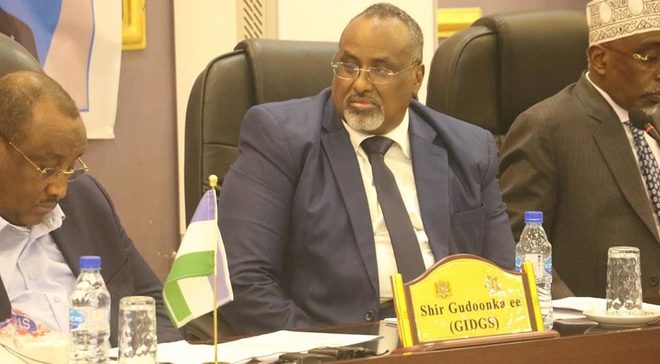 JOWHAR, Somalia – Regional lawmakers in Somalia say they have lodged a no-confidence motion against the embattled HirShabelle president, Mohamed Abdi Ware, as the state standing at a critical juncture, Garowe Online reports.

On Friday evening, a copy of an impeachment motion obtained by Garowe Online garnered the support of 54 legislators in the 117-seat chamber of parliament based in Jowhar city, about 90Km north of Mogadishu.

The MPs blamed the regional leader of incompetence, blatant disregard for the state constitution and failure in security after Al Shabaab, the Al-Qaeda-linked group blockaded the main route between Jowhar and Mogadishu.

HirShabelle which lost members of parliament and officials in terrorist attacks was mired by internal political standoffs and clan rivalry since its inception in late 2016.

The pending no-confidence motion drew irk of parliamentarians who blasted Ware's administration for failures to deliver services to the public and fulfil his early promises expressed in fine oratory during the election campaign.

The troubled leader who is in office in less than a year has recently reached a deal ending the deadlock with the Federal Government of Somalia in Mogadishu and ditching his colleagues in the Council of Inter-State Cooperation (CIC).

Last month, the CIC which brings together the leaders from Jubaland, Puntland, Southwest, Galmudug and Hirshabelle regions suspended cooperation with the central government for interfering with regional issues, failure to implement security architecture and not fulfilling political agreements.

They also cited lack of tangible progress in the constitutional making process, saying the Mogadishu-based government has done little to ensure that the country holds a one-person-one-vote election in 2020.