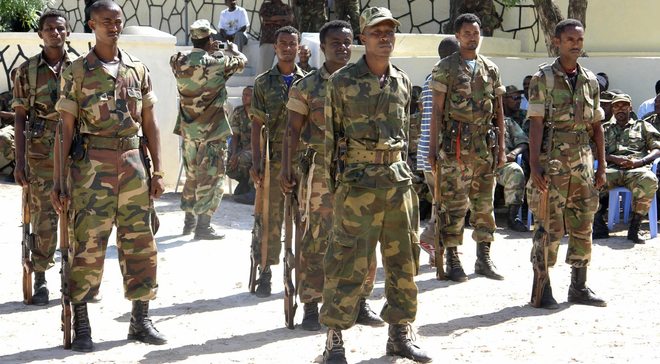 NAIROBI, Kenya - The already fragile situation in Somalia could deteriorate further should the United Nations fail to intervene in time following the latest incursion of Non-AMISOM Ethiopian troops in Jubaland.

Already, the United Nations Panel of Experts has warned against maritime disputes between Kenya and Somalia, which they say could 'disintegrate AMISOM and give room for Al-Shabaab'.

In their voluminous report released last week albeit, under difficult circumstances, the experts called for timely intervention, even though the case it at the International Court of Justice.

But unity within AMISOM will be tested in the coming weeks, with Ethiopia now being dragged to Jubaland internal wrangles where Kenya has an interest.

Kenya and Ethiopia are integral in the AMISOM set-up. While Ethiopian National Defense Forces flushed Al-Shabaab out of Mogadishu, Kenya troops vanquished the militants in the commercial city of Kismayo.

"The illegal intervention of the forces at the behest of and in collision with FGS is already impacting on security, political stability and unity of Jubaland," the state wrote to UN envoy James Swan.

"The Jubaland security in Northern Gedo has started to disintegrate and lose cohesion, and are likely to turn into clan militia," Madobe's administration stated, calling for immediate intervention.

When he was elected in August against the wish of FGS, Sheikh Madobe was first congratulated by Kenya through the ministry of foreign affairs.

Before that, KDF troops manning the Southern sector of AMISOM were accused together with Jubaland forces of blocking an Ethiopian plane from landing at Kismayo Airport.

“Jubbaland is the buffer for the whole of East African region and Kenya congratulates President Madobe for being in the forefront in the fight against terrorism,” he said.

Prof Harman Manyora, a political analyst in Nairobi opines that the intervention of Ethiopian troops in Gedo 'will water down stability gains in Somalia'.

"The long term effect will be an unnecessary standoff between KDF, ENDF, and FGS. Kenya will feel undermined in her quest to defeat Al-Shabaab in Jubaland," he said.

Manyora added: "This will end up breaking AMISOM in which Ethiopia and Kenya are protagonists. Timely intervention is paramount at this juncture."

President Farmajo has never hesitated to blame regional leaders in Somalia, and was quoted in Nairobi on Thursday blaming them for 'working with foreigners to undermine him'.

It's not the first time Ethiopian Non-AMISOM soldiers are accused of undermining Somalia's territorial integrity. In 2018, they were blamed for skirmishes in Baidoa following the arrest of Mukhtar Robow, a former Al-Shabaab spokesman.

The disintegration of AMISOM due to contributing nations' interest in sections of Somalia would be a huge setback to the UN, given that the country is preparing for polls in 2020.

Also, the UN Panel of Experts observed that any internal struggles within AMISOM will pace the way for Al-Shabaab to expand its network in Somalia.

While the UN is yet to respond to the latest allegations in Gedo, Ethiopian PM Ahmed Abiy has been dragged to Somalia internal politics, a move that could ruin his reputation.