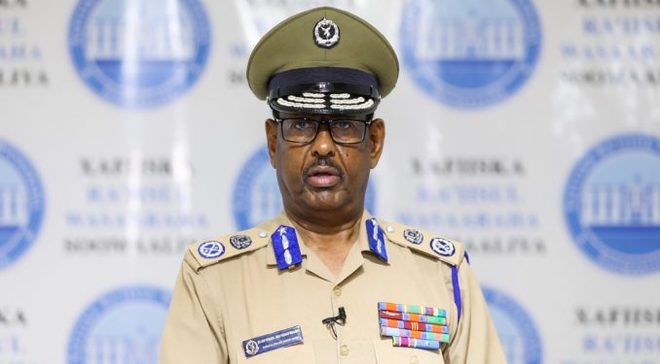 MOGADISHU, Somalia - As part of government efforts to curb the spread of Coronavirus, Somalia has imposed a dusk-to-dawn curfew in Mogadishu, the country's busiest city and home to all arms of the administration

Gen. Abdi Hassan Mohamed, the Police Commissioner, said the curfew will take effect in April. 15. All residents within the capital will be required to be indoor from 8 pm to 5 am, he said, adding that "police will implement the order".

The directive comes barely three days after Mogadishu Mayor Omar Filish asked residents to stay indoors to "avert further spread of Coronavirus". In his address on Thursday, Filish added that "I know very many people who have died from the virus."

But essential service providers such as medical personnel, health workers, food distributors among others, will not be affected by the curfew, the police boss said, adding that "we need each and everyone's cooperation".

Prime Minister Hassan Ali Kheire also reinforced the new government order, arguing that the overcrowding in the capital risks further transmissions, which could hamper proper treatment due to the country's lack of adequate health facilities.

"Considering the urgency to minimize the spread of the disease within the community, the federal government of Somalia announces that a dusk-to-dawn curfew would be enforced to Mogadishu from the evening April 15, 2020, until further notice," he said in s tweet.

On Sunday, the country announced four more new cases for the disease, taking the total tally to 25. The little number of infections is informed by a very small number of people who have been tested, analysts argue.

Of the infected people, two have since died and one recovered, Ismail Mukhtaar, the Federal Government of Somalia spokesperson said in a tweet on Sunday, while announcing the latest infections in Mogadishu.

The first victim to succumb to Martini Hospital was a 58-year-old with no travel history. On Sunday, one more patient, Khalif Mumin Tohow, a state minister for Justice in HirShabelle who doubled as regional MP also succumbed.

Sources privy to his ailment say he had attended a cabinet meeting in Jowhar last week. State officials are mopping hundreds of people who may have come into contact with him for testing and quarantining, reports indicate.

Dr. Fawziya Abikar, the Somalia health minister, announced that two patients were critical at the capital, although she did not reveal their identity. It's not clear if the state minister was among those in ICU.

But three doctors tested positive for Coronavirus, forcing a Turkish-run hospital to close down in Mogadishu. The hospital is part of the initiative by the Turkish administration, which is key in Somalia's infrastructural development.

The curfew in Mogadishu comes a fortnight after semi-autonomous state of Puntland imposed a similar curfew in Garowe, the regional administrative capital. The state, which is one of the safest in Somalia, is yet to record any case.

Besides the new measures, Somalia has among others, suspended domestic and international flights, banned mass gatherings and meetings, halted learning in a bid to effectively fight the disease.

International partners on Sunday lauded the country for the swift measures to arrest any further spread, both insisting that they will continue to support Somalia in the Covid-19 war. They also urged the central government to work closely with regional states.

"The partners welcome the development of Somalia’s COVID-19 Response Plan and appeal for all stakeholders to support it and align and coordinate their assistance with its priorities," read part of the statement.

So far, over 1.8 million people have contracted the virus worldwide. Of that number, 420,000 have fully recovered while 103000 have since died. The US, Italy, Spain, Britain, and China are the worst hit, data obtained from John Hopkins University indicate.