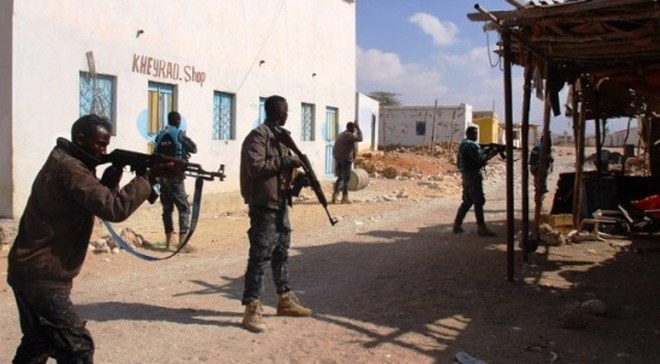 BOSASO, Puntland - Pro-Islamic States militants were reported to have targeted Puntland forces following an overnight attack at their outpost near the ancient port town of Qandala in Bari region, Garowe Online reports.

The midnight raid was followed by a fierce gunfight between the ISIL-linked attackers and Puntland's Darwish troops that lasted for several hours and caused heavy casualties on both sides, according to a military official.

Speaking to VOA Somali Service, Fowzi Hassan Ismail, the area force commander has confirmed the death of at least one soldier on their side and 3 others including civilians were injured during the gun battle.

The fresh overnight took place in Anjel village, situated approximately 40 kilometers away from Balidhidin town in Bari region of Puntland, a Federal Member State in the northeast of Somalia.

"We came under ISIL attack at around 1:00 a.m. last night. They attacked us from three directions," said Ismail, adding the troops have managed to fend off the assault and inflicted irretrievable losses on the militants.

This marks the second time that the fledgling Islamic State branch has been able to attack Puntland army in the area as the regional defense forces that were deployed in the coastal towns to fight against terrorist groups.

The Islamic State’s branch in Somalia which was officially formed in October 2015 in Puntland, is led by Abdulkadir Mumin, a former Al-Shabaab commander.

On 27th October 2017, heavily armed fighters loyal to ISIL seized Qandala after an offensive against Puntland regional forces, the first substantive territory it has taken since emerging in the year of 2015.