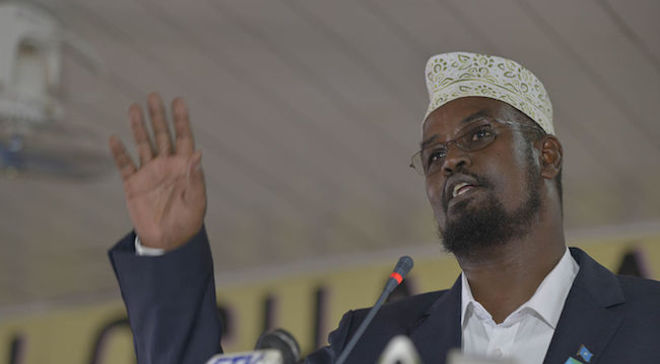 KISMAYO, Somalia - As the Somali Federal State, Jubaland heads into its third election, the incumbent President has warned political tension and incitement of violence by the presidential candidates, Garowe Online reports.

President Ahmed Madobe has made the remarks on Sunday, August 11 while delivering a speech to worshippers after performing Eid Al-Adha prayer at the Presidential Palace in the port city of Kismayo.

Madobe who is running for a third term in office called for calm ahead of Jubaland state presidential and parliamentary elections due to be held probably on 24–30 August 2019.

The sitting president has been in power since the establishment of the southern Federal State in 2013.

With Kenyan military’s help, Ahmed Madobe drove the Al Shabaab out of the lucrative port city in 2012 that paved the way for him to win the presidential election in May 2013 and is up for re-election in August 2019.

Madobe’s candidacy faces challenges and stiff competition as Mogadishu-based Government is allegedly trying to split his support base by backing some rival aspirants vying for the top seat of Jubaland.

The embattled regional leader urges the opposition candidates to lower their temperature and work towards the unity and prosperity of the people and avoid self-interest.

“There is no need for self-interest in political tension that risks security. The stability and peace that Jubaland is currently enjoying was hard-earned and should not be destroyed during the electioneering period,” he said.

In addition, President Ahmed Madobe asked the leaders of the Federal Government of Somalia to exercise their responsibility to unite people in the state and play a role in the stability and development of Jubaland.

In the response letter addressed to James Swan, obtained by Garowe Online, JIBEC distanced itself from allegations of involving in corruption and bias as well as working in favor of one candidate over others.

Jubaland is geopolitically and economically strategic region and is also seen as a strategic partner for Kenya in its ongoing fight with the Al-Qaeda ally in East Africa, Al-Shabab group.