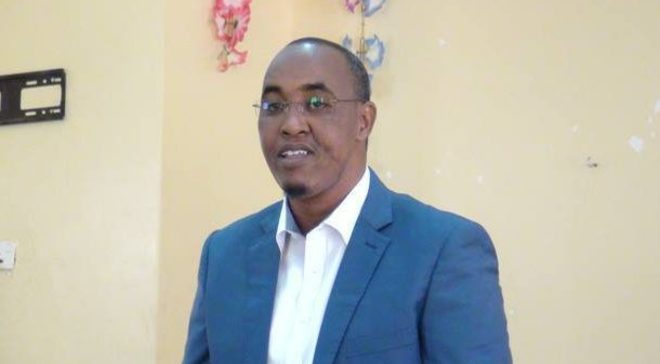 MOGADISHU, Somalia - Jubaland security minister Abdirashid Janan has escaped from prison in Mogadishu on Tuesday morning, where he was detained, Zakia Hussein, the Deputy Police Commander has said.

Janan, who was arrested at Aden Adde International Airport last year, has been in detention awaiting trial within Mogadishu for about four months.

Authorities in Somalia arrested the minister for committing "serious crimes" on August 31st, 2019 while traveling to Addis Ababa.

At the time of his apprehension, Janan was being sought by the Interpol over alleged crimes committed in the Gedo region, authorities said.

Escaped through a window

In a tweet on Tuesday, Hussein said the suspect escaped from prison under unclear circumstances but added that "he is being pursued.

She said: "Former security minister of Jubaland Abdirashid Hassan Janan has this morning escaped a prison where he was held."

Without giving many details, the police boss added that "security agencies are pursuing to arrest the convict."

But according to a source, who spoke to Garowe Online in confidence, Abdirashid Janan “escaped” from a house near the headquarters of NISA, Somalia's spy agency.

The minister, the source said, was brought into the house five days ago. He reportedly “escaped” through a window.

The latest dramatic event could raise serious questions about the security of Somalia's correctional facilities and probably the integrity of those in charge.

Janan is a close confidant of President Ahmed Madobe, a fierce critic of the federal government and whose strained relationship with Mohamed Farmajo contributed to the arrest.

But his arrest was largely celebrated by human rights groups, which had linked him to atrocities committed in various parts of Jubaland, local media said.

UN Somalia and Eritrea Monitoring Group had accused Janan of murder, torture, unlawful detention and committing illegal acts between 2014 and 2015.

For a fair trial, the rights groups had recommended to authorities in Somalia to subject him to civilian courts within the country.

“The trial of Abdirashid Janan must usher in an era of justice for victims of human rights violations and their families in Somalia,” said Seif Magango, a director with Amnesty International.

A report by former Somalia and Eritrea Monitoring Group (SEMG) in 2016 and 2017 accused Abdirashid Nur Janan of committing acts of violence in the country.

His arrest came barely a few days after Somalia had banned direct flights to Kismayo, the regional capital of Jubaland state.

The Mogadishu administration had refused to acknowledge the victory of Madobe, accusing him of rigging himself in with help of "foreigners"

Janan is believed to have played a critical role in blocking an Ethiopian aircraft from landing at Kismayo Airport, leading to the standoff.

During his time at the realm of power, he was linked to frequent draconian security policies imposed in Jubaland by the administration, authorities claimed.

Why his escape could ignite tensions

And his escape from prison could likely reignite the strained relationship between Mogadishu and Kismayo, with the FGS keen to stamp its authority.

For months now, efforts to reconcile Farmajo and Madobe have hit a dead end, with Qatar and Turkey playing a key role in mediation.

Last year, Jubaland accused Farmajo of "working with Ethiopian non-AMISOM troops to cause violence within the Gedo region."

So dire has been the situation that UN special envoy to Somalia James Swan has often warned of "humanitarian crisis" should the impasse persist.