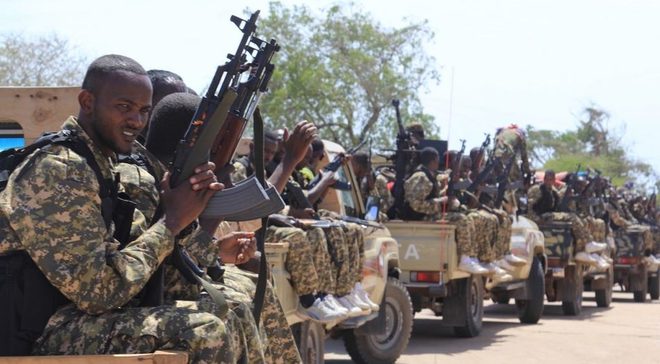 Al Shabaab militants withdrew from Badhadhe, a coastal town located about 200 km south of Kismayo, the regional capital of Lower Jubba region after a vast sea and ground offensive by the joint forces.

Abdirashid Janan, the security minister of Jubbaland state said that the allied troops have seized the town, without suffering any casualties during liberation of the town from Al Shabaab fighters.

"Jubbaland state forces supported by AMISOM soldiers have jointly dislodged Al Shabaab rebels from the key town of Badhadhe in Lower Jubba region. There were no casualties on our side," Janan said.

The minister said the operation will continue until the Al Qaida-linked Al Shabaab militants are pushed from Jubbaland regions under the authorization of state's President Ahmed Madobe.

At least six people, including four Al Shabaab members were killed in today's offensive in Badhadhe.

A sources in Kismayo has told GO that US forces have assisted Jubbaland and AMISOM troops in the recapture of Badhadhe district from Al Shabaab, a report that minister Janan dismissed.