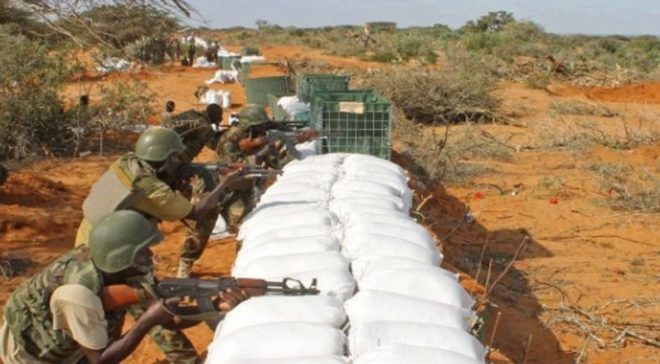 MOGADISHU, Somalia - The volatile Gedo region was turned into a battlefield for the second time in as many months, multiple reports indicate, in the latest skirmishes that could undermine the fight against Al-Shabaab militants.

In the first battle on Wednesday, elite troops from KDF manning sections of Gedo region opened fire at Al-Shabaab militants in the vicinity of Balad-Hawo, in a battle that lasts for almost an hour, a source said.

According to the source, who spoke to Garowe Online in confidence, the militants launched Rocket Propelled Grenades [RPGs] at a KDF contingent, leading to the fierce gunfight.

Two Al-Shabaab militants were killed on spot with several sustaining serious wounds, said the source, adding that a good number of the terrorists disappeared to the nearby thickets.

"It lasted for about one hour. They had tried to attack using RPGs but our team managed to handle them. Two of them were killed on the spot," said the source, adding that, "some managed to escape to nearby thickets".

To pursue the elements, Special Forces from KDF have joined the ground troops in Gedo, and another operation is expected to be mounted within the region, added the source without revealing the number of fresh troops.

Contrary to reports by Al-Shabaab proxy media, he added, the Kenyan troops, who are part of the AMISOM team, did not suffer any casualties. The Al-Shabaab had claimed that three KDF troops and two civilians were killed.

The onslaught comes barely a day after the Kenyan troops repulsed another attack in Lower Jubba after the militants tried to run over a military base. Dozens of militants were killed during the encounter, reports indicate.

KDF has managed to neutralize Al-Shabaab in Sectors II and VI of AMISOM in Jubaland, although the team is scheduled to exit in 2021. Despite the gains, the team lost close to 300 troops in El-Adde and Kulbiyow in 2016 and 2017 respectively.

But what could ignite anxiety is a reported encounter between Somali National Army [SNA] and Jubaland forces loyal to powerful regional security minister Abdirashid Janaan, who has reportedly been holed up within Mandera and Balad-Hawo.

A gunfight ensued between the troops while escorting Janaan, with RPGs being used by either side. The clashes forced a section of Balad-Hawo residents and those in Mandera within Border Point One to flee from their homes, sources said.

Stray bullets hit several buildings within the region as troops from both sides responded in defense. It's still unclear which side provoked the other, although such encounters have been common in recent months due to strained relationships between Jubaland administration and the federal government.

Further, it's not clear where Janan was traveling to although he had been holed up in the Kenyan side. The Kenyan government had, however, banned movements within Mandera town hours before the confrontation.

But contrary to social media reports, the KDF troops were not involved in the tussle, despite an earlier operation which targeted the Al-Shabaab within the Gedo region, a source privy to the skirmishes said.

"It was purely a Somali affair and our team has nothing to do with it. We're only involved strictly in AMISOM operations," said an offer in confidence, although KDF has previously been linked with close cooperation with JSF.

In February, the two parties clashed within the same region, something that almost strained the relationship between Kenya and Somalia. FGS accused Kenya of "interfering" with its internal affairs but Kenya responded by warning the federal government against "provoking" KDF along the border.

A ceasefire was declared after President Uhuru Kenyatta and Mohamed Abdullahi Farmajo agreed to solve the issues diplomatically. The US had pressured both sides to embrace dialogue through Ethiopian PM Ahmed Abiy.

The conflict, both US and international partners argued, would pave room for Al-Shabaab "resurgence" within the Gedo region. The FGS and Jubaland conflict, analysts claimed, could put Ethiopian and Kenyan troops at loggerheads in Gedo.

Recently, non-AMISOM Ethiopian troops were sighted in the Doolow district within Gedo where they established a base.

While KDF supports Jubaland leadership under Ahmed Madobe, the Ethiopian team has been working with FGS, which is reportedly keen to have the former Ras Kamboni Brigade commander overthrown as a regional leader.