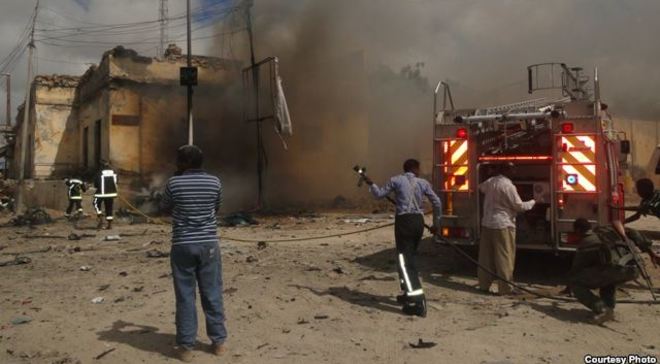 MOGADISHU, Somalia - At least one Somali government soldier was killed, and several were wounded in a landmine blast in Mogadishu on Wednesday morning, Garowe Online reports.

A witness confirmed to GO that the attack occurred after Mogadishu Stabilization forces caught in an explosion triggered by an improvised explosive device planted on the busy Tarabunka intersection in Hodon district.

The bomb went off as the troops were on a routine patrol in the area, he said.

Al Shabaab has claimed credit for the attack, saying it killed three soldiers, a claim denied by the local security officials. The incident curtailed the movement of people and public vehicles for minutes.

The soldiers have cordoned off the scene after the explosion as ambulances rushed the wounded to nearby hospital.

Wednesday's attack was the latest in series of bombings in the seaside capital over the past few months, including Oct 14 truck bomb at Zoobe junction which claimed the lives of more than 400 people.