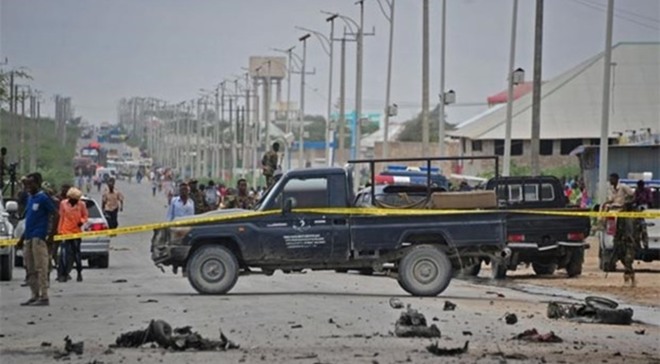 MOGADISHU, Somalia- A landmine explosion was reported to rip through a vehicle ferrying representatives from international charities and government officials on Wednesday near the capital Mogadishu, Garowe Online reports.

The blast happened in Garasbaaley area west of Mogadishu city. The convoy is believed to be transporting UAE’s charity officials, members of the national drought response committee and Banadir regional administration aiming to visit IDPs camps near the capital.

According to an eyewitness, the landmine struck a vehicle belonging to Abdiqadir Dalxa, the head of aid coordination for Banadir regional administration.

However, the causalities of the attack are unknown and no group has claimed responsibility of the blast against the convoy.

Following the explosion, local authorities blocked the road and launched an investigation into the scene of the attack. The authority blamed al-Shabaab militant group for planting the remote-controlled bomb in the road.

Al Qaida-linked al-Shabaab group has recently intensified terrorist attacks in the capital Mogadishu and other areas aiming to topple the western-backed Somali government in Mogadishu.