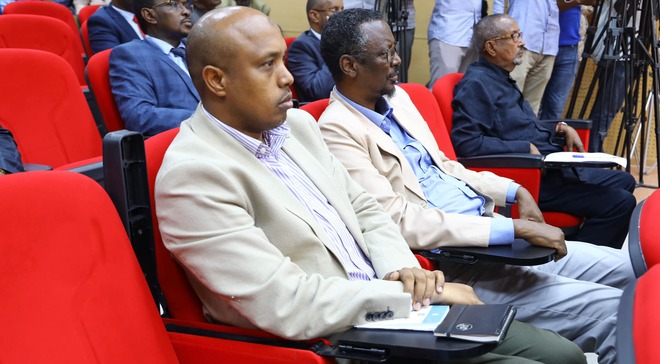 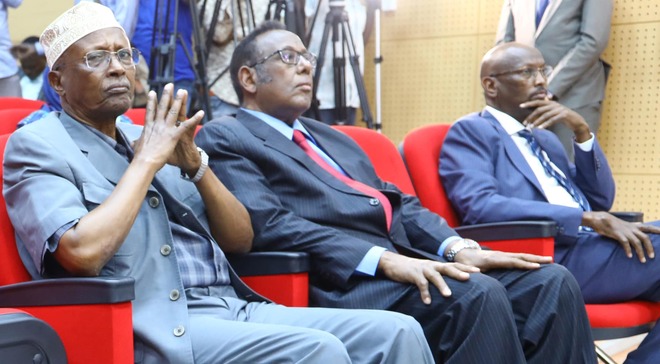 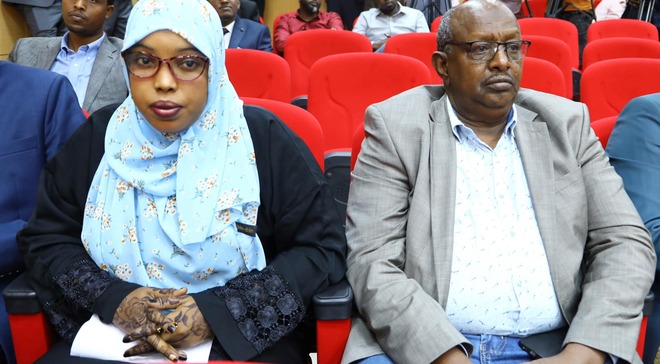 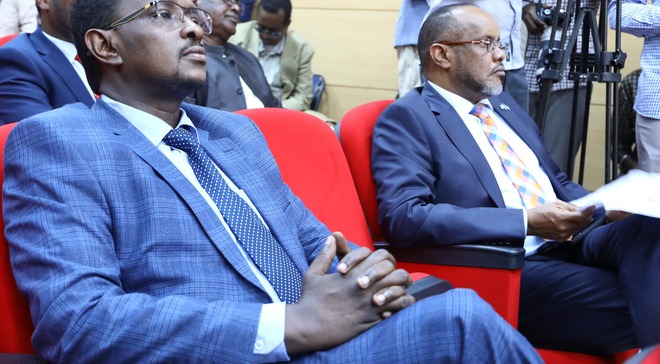 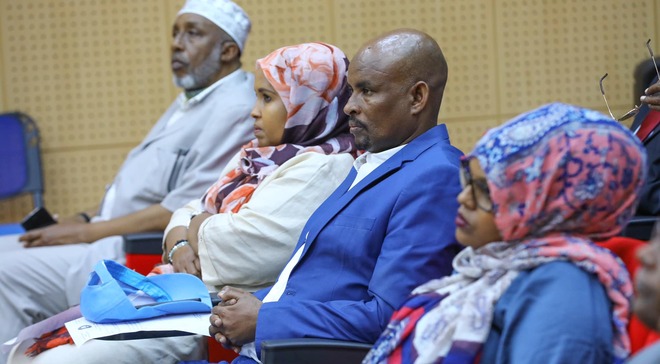 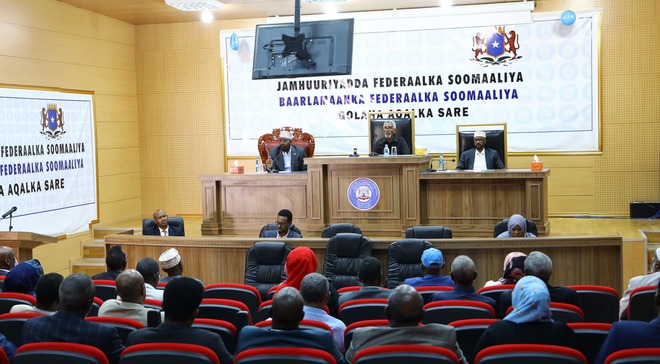 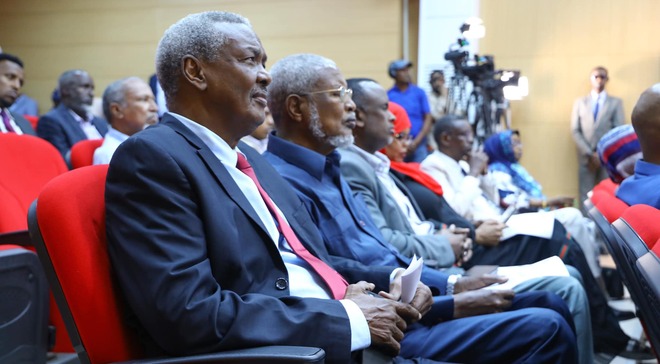 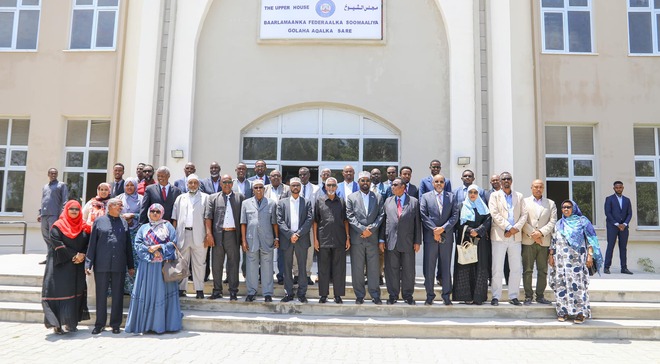 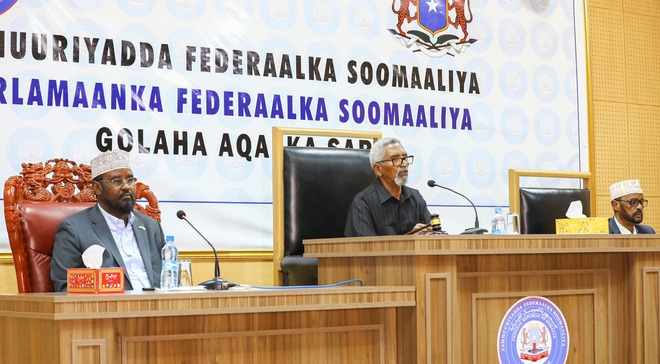 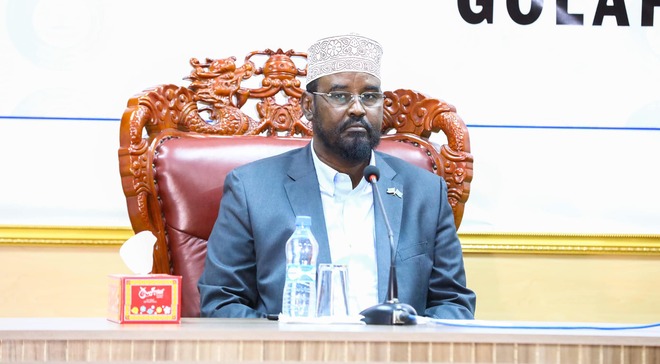 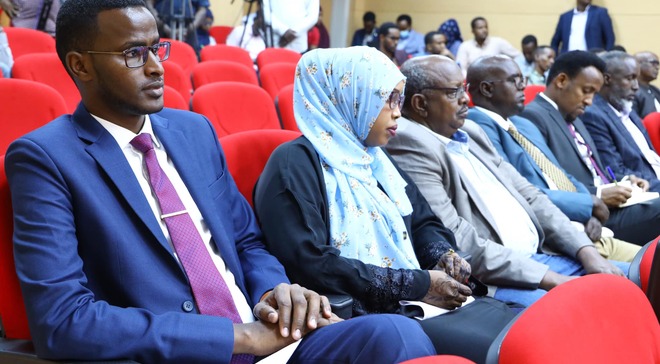 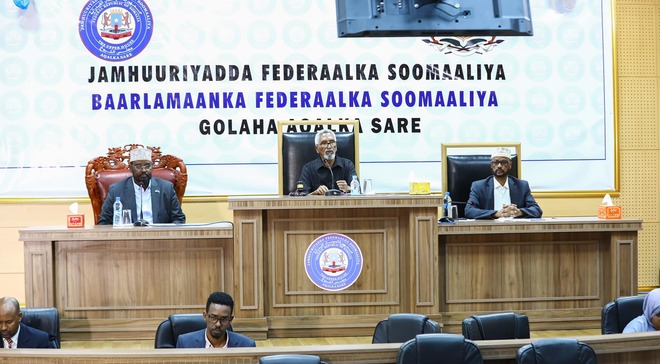 MOGADISHU, Somalia - Jubaland State president Ahmed Madobe has on Sunday delivered a speech to the Senate in Mogadishu, briefing Senators on the current situation in Somalia.

In his half-hour-long address, Madobe discussed the relationship between Jubaland and the central government as well as the latest political developments and the war on Al-Shabab.

He furnished the House with details of progress in his Federal State, and the ongoing fight against Al-Shabaab without giving details of the FGS’s move to withdraw SNA troops from Gedo.

The controversial electoral law, last year’s election in Kismayo, and FGS’s interference in Jubaland have caused the bitter rift between the regional leader and Villa Somalia.

Madobe says he believes “genuine dialogue and compromise” will help end the “tit-for-tat” situation in the country, where stakeholders are in deadlock over the election model.

As Farmajo’s 4-year tenure expires in 5 months, the opposition political parties and the Federal States have been demanding timely, inclusive, and transparent polls in 2020-21.

For several years now, Jubaland has been at loggerheads with FGS over several issues, including the August 2019 election in Kismayo that was not supported by President Farmajo, leading to strained relations between the two sides.

Early this year, the Somali National Army [SNA] were deployed to the Gedo region in Jubaland, further leading to protests in Kismayo. But reports indicated on Sunday morning that the federal government had agreed to withdraw the troops after the meeting with Jubaland President Ahmed Madobe and Farmajo.

Madobe, who is serving his second term as Jubaland president, met Lower House Deputy Speaker Abdiwali Mudey for closed-door meetings ahead of his address to the Senate. The Lower House has been at loggerheads with Senate over the controversial electoral law.

The two assemblies have often differed on important issues and often derailing efforts to restore normalcy in Somalia. While the Senate insists that it has powers to enact electoral laws, the Lower House has often discarded this fact, further causing a rift that could plunge the country into a crisis.

After the Senate address, Madobe will meet President Mohamed Abdullahi Farmajo also with Puntland President Said Abdullahi Deni where they are expected to discuss the current pre-election crisis. Both Puntland and Jubaland had withdrawn from Dhusamareb III talk a fortnight ago.

Madobe announced that the conference was hurriedly concluded before his and his Puntland counterpart Said Deni arrived in Dhusamareb last month.

After the Garowe meeting with Deni, he said they decided to go to Mogadishu for talks with Farmajo and all other regional states to reach a comprehensive deal on the contentious issues.

Senate Speaker Abdi Hashi has been pushing for timely elections in Somalia, further putting him at crossroads with his Lower House counterpart Mohamed Mursal, a close ally of President Farmajo. However, the Dhusamareb III conference settled on timely elections in the country.