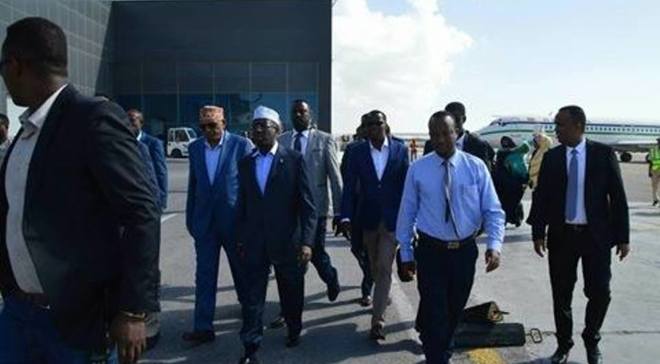 MOGADISHU, Somalia- Former Somali President Sharif Shaikh Ahmed, has criticized the caretaker President Hasan Shaikh Mahmoud for failing to deliver promises he made after his election back in 2012, Garowe Online reports.

Following his arrival to the Somali capital of Mogadishu on Wednesday, former President Ahmed made a press statement to the local media where he commended the new Federal Parliament for assuming legislative mandates and expressed hope in their role to help Somalia to overcome challenges.

Ahmed blamed the Somali government-term ended in September 10- led by Mahmoud for failed policies in the past 4 years as the country witnessed unprecedented levels of insecurity, corruption, intimidation, embezzlement and clan conflicts.

He stated one of the main security challenges in the country is not paying the salaries of the government forces and said; “it’s shocking, we know the port alone generates millions in revenue, so the question we need to ask here is where that money goes too.”

“With different sources of revenues for the government and its unable to pay the salaries of troops indicate the level of corruption and embezzlement,” added Ahmed.

He later urged the Federal Parliament to form a committee that oversees the national treasury to prevent misappropriation or utilization of the funds in unlawful ways.

Ahmed took aim at Mohamud, accusing him of incompetence. None of the six pillar policy he promised were met, you see how bad the security situation is, main roads are closed in the capital complicating the lives of people, He said.

He described Mahmoud’s bid for re-election as “shameful” and accused him of abusing power to enrich himself and his close allies to favor their campaign in the forthcoming election.

Moreover, former President has expressed confidence in winning the presidential election amid expectation of stiff competition between candidates hoping the seat.

“I am hundred percent confident in the upcoming election, I am the new President. No matter, he [Mahmoud] paid the money [bribes] to the MPs but the votes will not be for him,” said Ahmed.

The new lawmakers are set to pick new Somali President in a secret ballot in a date that is not yet scheduled by the Federal Parliament.