Somalia: Militant plotted raid at US Base in Kenya slapped with life in jail 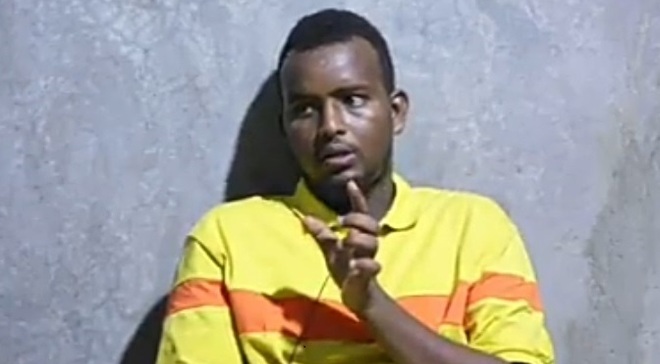 MOGADISHU, Somalia - An Al-Shabaab defector believed to have participated in the US Naval Base raid at Manda Airfield early this year in coastal Kenya has been convicted by a military court in Somalia, in yet another dramatic achievement which shows efficiency in the internal systems of the Horn of Africa nation.

Tough-talking military court chief Col. Hassan Ali Nor [Shute] convicted Farhan Mohamud Hassan, who has been serving in the militant group for years before his exit, in a prosecution that exposes infiltration in government institutions by the Al-Shabaab militants, who have been wreaking havoc in the war-torn nation for several years.

The convict, in an interview with local media, confessed joining the Al-Qaida linked group in 2010 in the Kenya-Somalia border town of Balad-Hawo, but would later use the Amnesty given by security forces in Somalia to defect, and was later recruited to the SNA to help in fighting former allies.

But intelligence services in Somalia linked him to infiltration of the SNA having investigated his conduct before being arraigned in the military court. The convict was slapped with a life sentence and would spend his entire life behind the bars for breaching confidence and lying to the state.

Shockingly, Farhan Mohamud Hassan admitted helping Al-Shabaab to transport explosives for Al-Shabaab to Manda Bay in Kenya before the January 5 deadly attack at the US Naval Base, which is used in training regional forces from across East Africa.

"I joined Al-Shabaab in 2010 before defecting to the Somali National Army. However, I helped them in transporting explosives to the Manda Airfield where they waged an attack," Mohamed said in a confession that shocked reporters and the senior military court officials shortly after his conviction.

The deadly unprecedented attack left three US citizens dead among them a serviceman according to a report issued by the Department of Defense. In a siege that lasted for five hours, the US military and the Kenya Defense Forces [KDF] counterparts managed to kill five militants on spot.

After the attack, more Special Forces from the East Africa Regiment Unit were deployed to Lamu before the visit of the US Africa Command chief Gen. Stephen Townsend, who visited both Kenya and Somalia. The base has since been secured and activities resumed with dozens of soldiers being trained by the US.

The confession by the convict further vindicates the KDF intelligence team which had raised a red flag over the infiltration of Al-Shabaab in Somalia's key institutions. In a report which was dismissed by the Mogadishu administration, KDF insisted that the National Intelligence Security Agency [NISA] of Somalia was sharing intelligence briefs with Al-Shabaab to the detriment of foreign troops.

The conviction also comes at the time the US is contemplating to start carrying airstrikes on Kenyan soil particularly in the northeastern region. The proposal by the US Africa Command is currently being reviewed by the Department of Defense in Washington DC, the New York Times reported.

The new authorities, which must still be approved by Defense Secretary Mark T. Esper and then President Trump, do not necessarily mean the United States will start carrying out drone attacks in Kenya. Nevertheless, they would give Africa Command permission under certain circumstances to expand the counterterrorism drone war into another country.

The push for the expanded authorities traces back to a Shabab attack in January on a military base in Kenya that housed United States troops, the officials said. The attack on the airfield at Manda Bay killed three Americans and caused millions of dollars in damage, NYT added.

Bashir Qorgab was traced in Saakow town within Somalia, after having engineered the attack at Manda Airfield, and such actions necessitated the decision by AFRICOM to push for the strategy. The militants have often sneaked into Kenya due to the porous border of the region.

Col. Christopher P. Karns, the command’s chief spokesman, declined to comment on the new authorities. “Africom certainly recognizes the need to apply consistent international pressure on Al-Shabab and to monitor their activity, presence, and actively confront them in order to prevent their spread,” he said in an email. “This can take several forms.”

Lt. Col. Anton T. Semelroth, a Pentagon spokesman, added in an email, “The U.S. military will defend U.S. personnel, citizens and homeland as necessary anywhere in the world.” He also did not address the new guidelines.

Last week, the US Africa Command ranked Al-Shabaab as a dangerous outfit against her citizens and allies in a statement that was released by General Stephen Townsend, who is the commander of the outfit. The US, he insisted, will continue assisting Somalia in the fight.

Barely a week ago, the militants raided a US army outpost known as Janaa Abdalla about 60 KM West of Kismayo, in an attack which left at least two Danab soldiers dead. According to the Command, a US serviceman was injured, and Al-Shabaab announced that the troops have since abandoned the area.