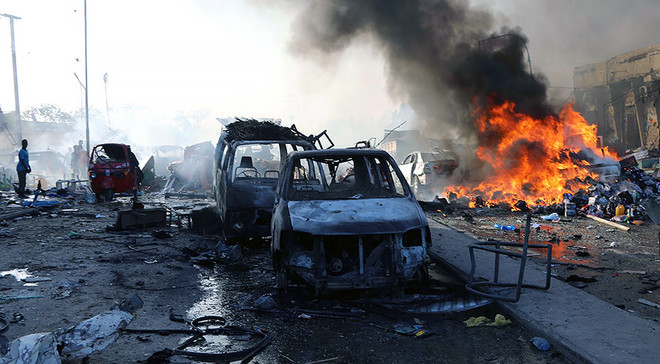 MOGADISHU, Somalia - The death toll from a devastating truck bomb blast in the Somali capital, Mogadishu on Saturday afternoon is rising up each passing hour, Garowe Online reports.

Medical officials at the city's hospitals confirmed to GO the toll jumped to more than 200 people, some of them have been burnt beyond recognition by the explosion at the busy K-5 junction in Hodon district.

Abshir Bukhari, the deputy speaker of Somalia's Senate put the number of fatalities at 230, while hundreds of others sustained injure and had been admitted to hospitals to receive treatment.

Police said many are still missing and thought to be under the rubble following the powerful blast. The doctors at Medina hospital say they have received 67 bodies, including dozens of charred corpses.

Dozens more of the wounded succumbed to their injuries, medics said. Among the injured are Somali Federal MP, Mahad Salad and members of Foreign Ministry staff.

The explosives-laden truck being chased by the police through the city downtown before it went off at the busy junction during a traffic jam, according to the GO's reporter in Mogadishu.

Somali President Mohamed Abdullahi Farmajo has declared three days of mourning and ordered the national flag to be flown at half-mast in honor of the civilians killed in the horrifying massive attack.

No group has yet claimed responsibility for the truck bombing, which was the deadliest incident in the horn of Africa capital since Al Shabaab began its insurgency in 2008.

The security agencies of the Somali Federal government had been criticized for incompetence and lack of preemptive strategy to protect the citizens and avert attacks by the Militant groups, including Al Shabaab.