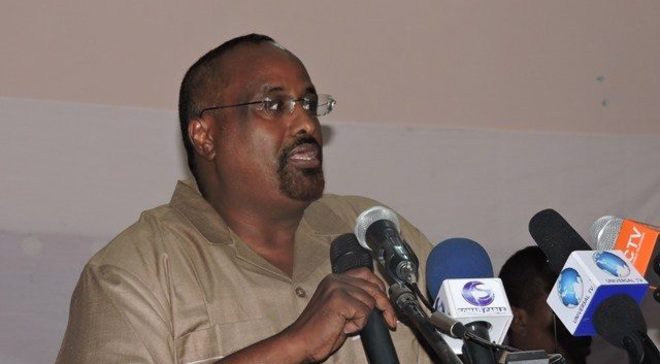 JOWHAR, Somalia - Mohamed Abdi Waare was elected as the new President for Somalia's southern semi-autonomous region of HirShabelle after an election in Jowhar on Saturday, Garowe Online reports.

The Electoral Commission announced that Waare was the winner of the election, after garnering 74 votes, beating a rival contender, Dahir Abdulle Awale, who got 23 votes during the second round of the voting.

Awale has accepted defeat and congratulated the new President on his election victory. Waare was sworn-in office swiftly after the result. He is expected to be inaugurated next Thursday, 20th September.

A ministerial delegation from Somalia’s Federal government, spearheading the Minister of Interior, Abdi Farah Sa'ed "Juha" attended the election as observers overseeing the process of the Presidential voting.

The new leader will replace former President, Ali Abdullahi Osoble, who has been ousted by the MPs on August 14, over Incompetence and lack of collaboration with Executive and legislative institutions.

Waare is an academic and veteran politician served in Ministry of Agriculture of Somalia under the former military regime led by Mohamed Siad Barre who had been overthrown by armed clan Warlords in 1991.