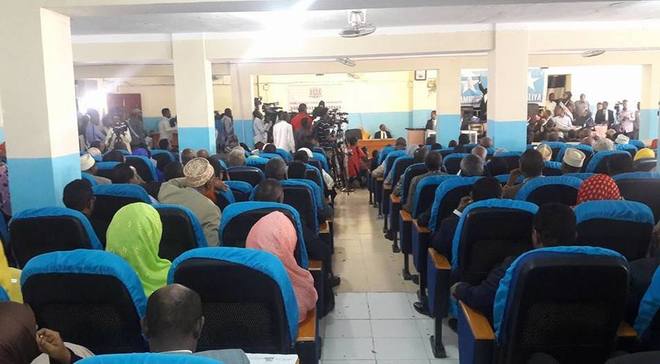 MOGADISHU, Somalia- Abdiwali Shaikh Ibrahim Mudey has won the election of first Deputy Speaker of the newly inaugurated Somali Federal Parliament after defeating his rival opponents in the second round of polling in the capital Mogadishu on Thursday, Garowe Online reports.

Four candidates were seen favorites in the first round of polling, who are Farah Shaikh Abdiqadir, Khadija Mohamed Diriya, Saed Husain Iid and Mudey, but later both Diriya and Iid withdrew out from the race.

259 Lower House MPs have casted their votes among the candidates, which saw the victory of Mudey for the Parliament Deputy Speaker, according to the poll results. Mudey won the election after obtaining more than 160 votes against Abdiqadir who received 93 votes in the second round of voting.

The voting indicated a significant loss to Abdiqadir, a key close ally to the caretaker President Hasan Shaikh Mahmoud, who competed to win a seat in the Parliament leadership.

On the other hand, the voting for the second Deputy Speaker, which carried out simultaneously saw the election of Mahad Abdalla Awad after receiving more than 160 votes against his rival Abdulqadir Baghdadi in the second round of polling.

Yesterday, the Federal Parliament re-elected Mohamed Osman Jawari as the Speaker following a landslide win in the first round of polling.

Somalia is preparing to hold the elections of Upper House leadership and new Somali President in January 2017.

The electoral process was scheduled to conclude in 2016 but due to recurrent delays to meet deadlines have led the process to be extended to 2017.