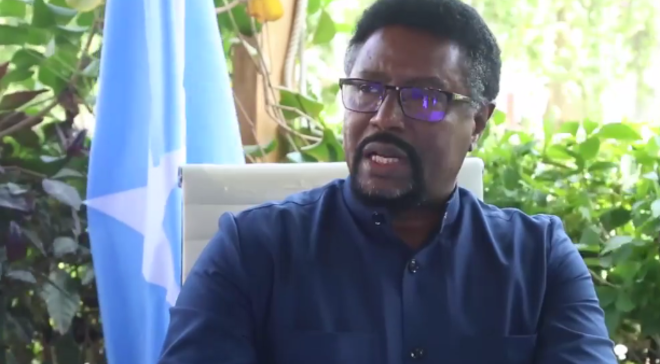 Speaking at a press conference in a hotel in Mogadishu, the first since moving out of his official residence in Villa Somalia the Presidential Palace last Wednesday, Mursal appealed to residents in Baidoa to remain calm and respect rule of law.

At least 15 people, including a regional MP, were killed in violent clashes between Somali police backed by Ethiopian troops and the supporters of Robow, who was arrested last Thursday in Baidoa and flown to Mogadishu subsequently.

Somalia's security ministry confirmed Robow's arrest in the same his he was detained and accused him of mobilizing militia to threaten Baidoa security.

Mukhtar Robow, who once became Al-Shabaab's deputy leader and spokesman defected to Somali Government last year and Villa Somalia has welcomed his defection.

The speaker urged the traditional elders to play their role in enduring peace and stability in Southwest State and recommended the postponement of the region's upcoming presidential election slated for Dec. 19 due to the unrest.

Mursal condoled the deaths of the innocent civilians and lawmaker Abdishakur Yaqub who have been shot dead by the troops and conveyed deep sympathy to the bereaved families. He wished a full and speedy recovery to all those wounded.

Continuing, the speaker of the House of the People blamed the Federal Government of Somalia for interference in the regional state affairs and manipulating the election after sending candidates with millions of public funds and soldiers to Baidoa.

He urged Farmajo's administration to respect the constitution and stay out of internal affairs of the Federal Member States amid deepening political crisis in the Horn of Africa country.

The speaker is currently at loggerheads with the President, Mohamed Abdullahi Farmajo after accepting an impeachment motion tabled by 92 Federal legislators against him last week.