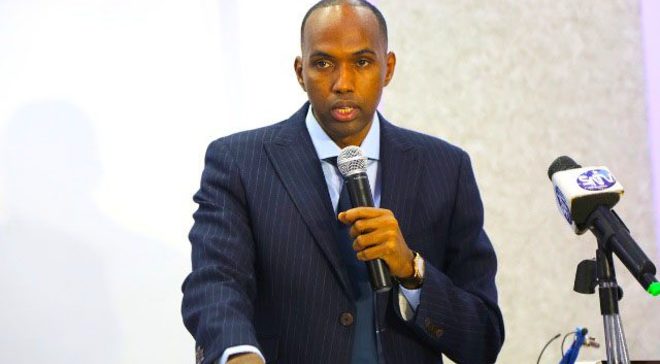 MOGADISHU, Somalia - The Prime Minister of the Federal Government of Somalia, Hassan Ali Khaire is expected to pay his first official visit to the United Arab Emirates [UAE] next week, Garowe Online reports.

Reliable Sources close to Villa Somalia tell GO that PM Khaire will be embarking on an official visit to the United Arab Emirates (UAE) starting from 25th February at the cordial invitation of UAE's authorities.

Somali PM is scheduled to meet with UAE officials in Abu Dhabi next week. Matters of mutual interests, especially in ways to mend strained relations between the two fraternal Countries will be discussed during the talks.

The upcoming visit comes as the leaders of Somali Federal Government have reaffirmed in 2017 decision to stay neutral in the Gulf Crises, particularly Qatar's dispute with the Saudi-UAE-led Arab states that began last June.

Many believe that Somalia's position is important for Qatar - Somalia's airspace remains open for Qatar Airways, a critical lifeline amid an air, sea and land blockade imposed on Qatar by its neighboring Countries in the GCC.

Last year, Somali PM Hassan Ali Khaire paid his first visit to Qatar amid political tension sparked between Somali Government and its Federal Members States over the stance towards the conflict of Gulf countries.

The UAE has historic trade and strategic relationship with Somalia and is playing a leading role in the efforts to rebuild the war-torn country by training its national army soldiers and carrying out development projects.