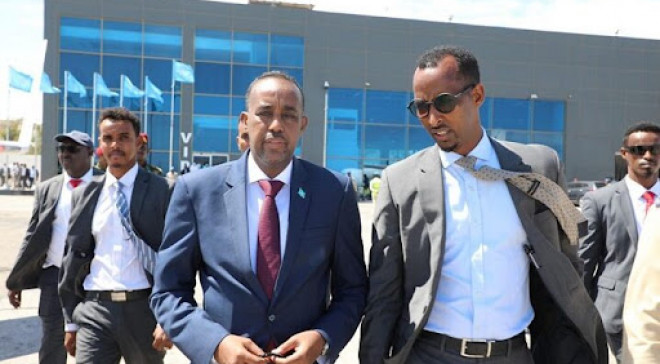 MOGADISHU, Somalia - Prime Minister Mohamed Hussein Roble has left this morning for Cairo, Egypt, following an invitation by President Abdel Fattah Al-Sisi, who has been advocating for a stable Horn on Africa, throughout his time as Egyptian leader.

Roble is expected to be in Cairo for three days, officials said, but the agenda of his visit has yet to be disclosed. His trip comes a few days after his official visit to Kenya, where he had been invited by President Uhuru Kenyatta.

His trip to Cairo comes at the time the country is holding senatorial polls. Although a number of states have elected senators to federal parliament, politicians from Somaliland are still locked in squabbles, which Roble was expected to intervene.

Last week, Roble held a meeting with the Egyptian Ambassador to Somalia, Mohamed Ibrahim Nasr at his office in Mogadishu on August 7. The two also discussed how to strengthen the ties existing between the two countries and Cairo promised to deliver Covid-19 supplies to Mogadishu to help fight the pandemic

Already, Roble has convened the National Consultative Forum set to kick off on Thursday 19th August in Somalia’s capital, Mogadishu. All the five Federal Member States including Benadir Regional Administration (BRA) are expected to grace the meeting with the aim of preparing for the upcoming elections.

Some of the agendas of the conference are to ensure that all electoral procedures are completed and that the issue of electoral funds is sorted to ensure the smooth running of the elections. The UN donated $1.7M recently towards elections in the country.

Roble, who is visiting Egypt in a few days’ time, has been at the forefront in steering the country towards the presidential elections set to be held on October 10, 2021, with sources speculating that he may be aspiring for the top seat.

Several months down the line, Somalia was entangled in political wrangles which resulted in the delay of the elections besides the squabbles between the federal government, federal member states, and the opposition.

However, since he assumed office last year, Mohamed Roble has managed to resolve the political impasse between the two warring sides and also succeeded in signing an agreement with the opposition paving way for the much-anticipated elections.