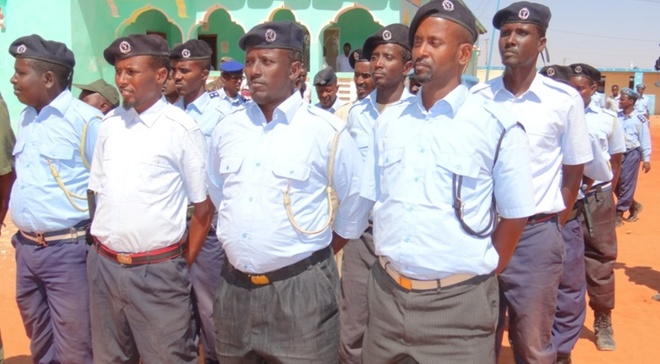 ADADO, Somalia- The Police forces of Somalia’s Galmudug state were reported to withdrew from their posts in Adado town on Monday, in protest to poor welfare and working conditions, Garowe Online reports.

Confirming the incident to the local media in Adado town, Deputy Police chief of Galmudug state, Omar Malin, said that forces have abandoned the Police headquarters in town and other main buildings demanding overdue government entitlements in the past months.

“The forces are refusing to assume their duties and responsibility, as most of the main posts are vacant,” added the official.

He later blamed the state authority and Somali Federal government for failing to provide welfare and necessary support for the Police forces fighting militants in Somalia’s central region. However, Galmudug officials have not released any statement in regard to the latest development in the region.

Recently, military forces in Hirshabelle state were reported to have staged mutiny in Hiiran region and blocked main roads in town demanding unpaid salaries form the newly formed administration. Other regional administrations have also witnessed spike of protest from the military forces poor complaining of poor working conditions and welfare.

This comes as the new Somali Federal government has promised to rebuild a strong national army and provide the necessary support but coincides in a time of worsening humanitarian conditions that hit the country. The new administration and international community are coordinating efforts to provide immediate assistance to the drought-hit communities in the region.