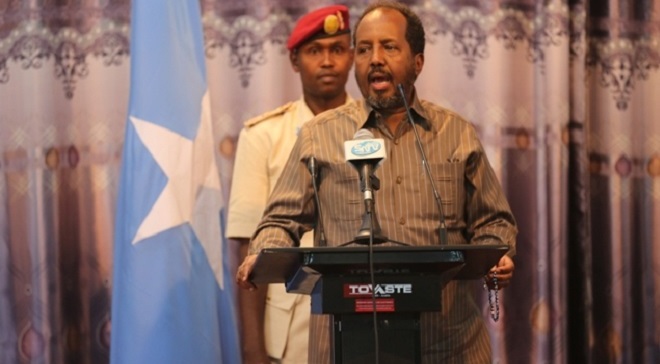 Mohamud who paid his fourth visit to the region on Wednesday has been struggling to bring the political standoffs to an end as rival clans in the region are at odds over the venue for the upcoming central state formation convention.

"After critical talks with the region's stakeholders, we have come to conclusion of declaring Dhusomareb as the capital of the federal state while Adado will be the venue of the upcoming conference,"Mr. Mohamud said at a press conference in Dhusomareb on Wednesday.

The president's decision has sparked discontent among elders from Adado, a town that was expected to be declared as the capital of the region have accused the president of bias, highlighting the challenges facing Somali government's efforts in adopting federalism system across Somalia.

Numerous efforts aimed at resolving the crisis seem to be crumbling.

Garowe Online has learned that Somalia's president along with Sa'ad and Saleban "Habargidir" clans have been campaigning for Adado to be declared as the region's capital before the president changed his mind today and instead declared Dhusomareb as the official capital as the result of a political pressure from political stakeholders in Galgadud region.

Political pressure enforced by politicians rhetoric have contributed to current political shift for the region.

Fighters from the moderate Islamists in central Somalia have prevented Djiboutian-AU troops to travel to Adado town to secure the town before the region's election, a move that analysts said could have a greater influence on the president's decision.