Somalia: President Farmajo invited to Islamic, US Summit in Riyadh 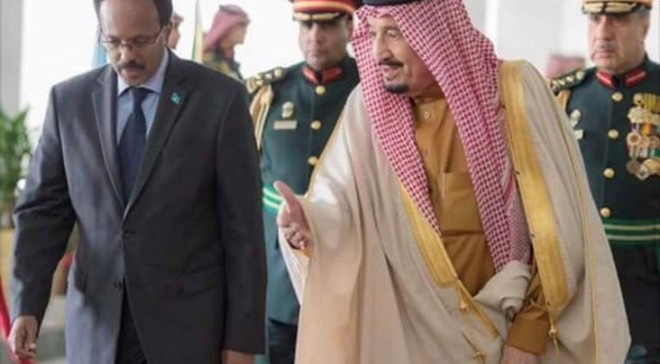 MOGADISHU, Somalia- Somali President Mohamed Abdullahi Mohamed Farmajo has been invited to attend the Islamic and US summits scheduled to be held in Riyadh city on May 21, Garowe Online reports.

According to sources Saudi King sent an official invitation to President Farmajo, inviting him to attend summit hosted by the Kingdom of Saudi Arabia, that will be attending by U.S. President Donald Trump.

The summit invitation was handed over to the Somali President by Saudi Ambassador to Kenya, Dr Mohammed Abdul-Ghani Khayat, according to Saudi Press Agency (SPA).

US President Donald Trump is scheduled to attend Riyadh meetings, which aims to enhance the relations between his new administration and the Muslim countries.

Trump’s recent travel immigration ban on citizens from six Muslim nations, including Somalia is expected to dominate the Islamic and US summit set to kick off in Riyadh next week.

This is Farmajo's second visit to Saudi Arabia, and the 9th overseas since Somali Federal lawmakers elected him as President in February 8.