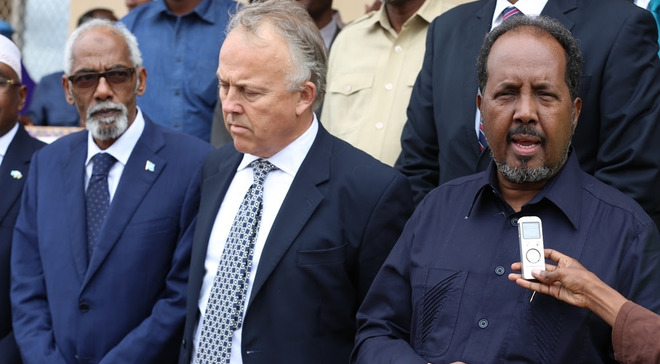 “The upcoming election is inseparable from the future of new and democratic Somalia,” Mohamud told the forum hosted by Southwest State President Sharif Hassan Sheikh Adan.

Somali President asked political leaders to put aside their “egos” and place national interests ahead of own amid mounting international pressure regarding implementation of electoral process parameters.

Mohamud suggested that politicians would have no sweeping role in Electoral Implementation Teams (EITs) at federal and regional levels in step towards strong public confidence in the parliamentary selection process.

Somalia President Hassan Sheikh Mohamud promulgated controversial election proposal by decree after government failed to muster enough votes for the blueprint in parliament on May 22.

Leaders are discussing technical and implementation details of how Somalia would select future lawmakers, timely preparations, and 30 percent of seats in both Upper and Lower House reserved for women.

UN Somalia envoy Ambassador Michael Keating said, he was pressing key stakeholders on the realization of women quota while praising National Leadership Forum (NLF) for the progress made in a short period of time.