Somalia president: We will not accept secession moves by Somaliland 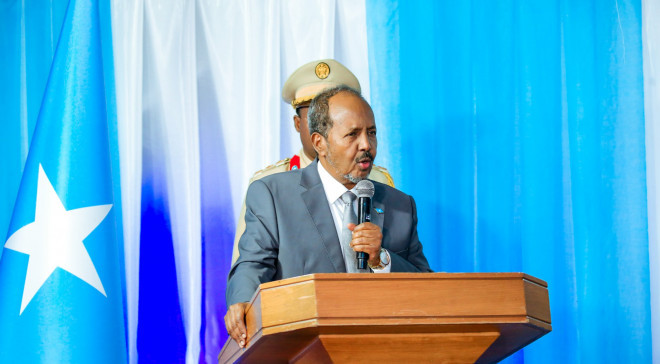 WASHINGTON - Somalia will not entertain calls for secession by the breakaway region of Somaliland, President Hassan Sheikh Mohamud has maintained, adding that he will protect the country's sovereignty as envisaged in the constitution of the Horn of Africa nation.

While addressing hundreds of Somalis living in the United States, Hassan Sheikh said his government will not pressure Somaliland to drop bids for self-determination but insisted Mogadishu will not allow anything that presses it to certain limits.

According to the Somali head of state, the secession idea harms the unity of the country, noting that his administration will not be keen which such moves given the divisiveness that it brings among Somalis not only in the country but across the world.

"We were committed not to using Govt's legal diplomatic muscle to put pressure on Somaliland, but there are limits. We will not accept everything whatever is called that promotes Secession and harms the unity of Somalia," he said in his speech at Washington DC.

His comments are likely to spark protests from Somaliland politicians who have been pushing for international recognition, a move that has often faced resistance from Mogadishu, which maintains that Hargeisa is part of the country and more so, a state of Somalia.

Somaliland President Muse Bihi Abdi had activated shuttle diplomacy including visiting America recently to argue the case of Somaliland, a region that declared self-independence in 1991 following the civil war in the country where thousands of people died in the north.

The region has established a government, its own judiciary, parliament, and Central Bank along with a solid military, and has sustained itself for over three decades. Somaliland is, however, yet to be recognized, with Somalia maintaining that the region remains part of her territory.

Last year, Ethiopian Prime Minister Abiy Ahmed and Djibouti President Omar Guelleh started talks between Hargeisa and Mogadishu but the plans were abandoned after both parties failed to agree on the principles of negotiations. Somaliland maintained that it had nothing to do with Somalia.