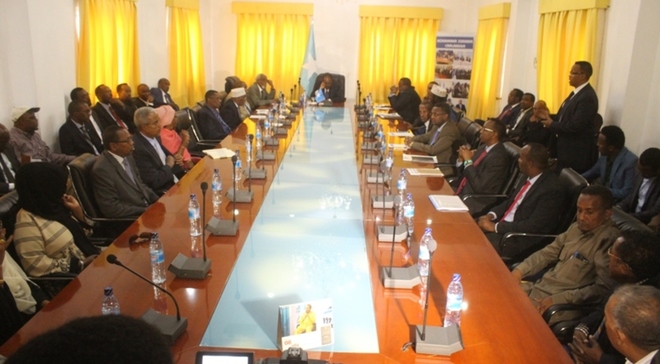 MOGADISHU, Somalia- A communiqué is expected to be released today following the conclusion of the National Leadership Forum conference in the Somali capital of Mogadishu, attended by leaders of the Somali government-term ended in September 10- and regional states, who were discussing key outstanding issues that delayed the Somali election, Garowe Online reports.

Close sources tell GO, that Somali leaders have agreed to the new schedules set for the elections of new Parliament Speakers of Upper and Lower Houses and Somali President that will take place in January 2017.

The new dates will see the elections of Parliament Speakers occur in January 5, whereas the presidential election is set on January 22.

The Somali leaders have also imposed new conditions for the presidential candidates who are willing to compete for the top office in the country, added the source

Candidates will have to pay fees amounting $ 30,000 and must have the support of at least 20 Federal MPs to be eligible to compete in the election.

The leaders also agreed to dismiss recent decision made by Somalia’s Independent Electoral Dispute Resolution Mechanism (IEDRM), which nullified voting results for seats triumphed in the parliamentary elections in the regional states.

The Somali leaders decided to accept the results of the seats despite compelling evidences of electoral malpractices and vote rigging for those outstanding cases considered by IEDRM.

Following much deliberation on the outstanding dispute over the distribution of Upper House seats allocated to Somaliland community, particularly for seats from Sool, Sanag and Ayn regions, Somali leaders have agreed to allocate one seat for Sanag region to Puntland, thus receiving a total of 12 Senators representing the state in the upcoming Upper House chamber of Federal Parliament.