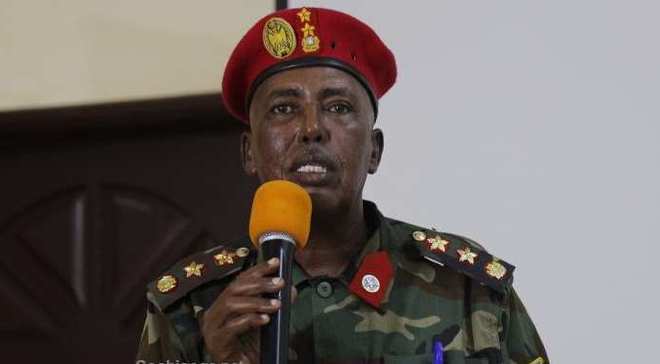 Mohamed was removed from his assignment as the general commanding officer for presidential guard force over allegations that he got involved in Wednesday's standoff at the country's parliament headquarters in Mogadishu.

The commander, according to the sources has allowed a group of presidential guards to escort the embattled lower house speaker Mohamed Osman Jawari and his second deputy Mahad Awad and entering weapons to the parliament illicitly.

Additionally, Mohamed voiced his opposition to the government's move to stripping off Jawari's security detail and the detention of dozen of soldiers who had earlier escorted him to Parliament building for violating security procedures.

A security official, speaking on condition of anonymity has confirmed to GO that Colonel Omar Abdirahman was appointed as interim commander of the presidential guard, replacing the sacked chief who has been in power since 2017.

"The head of Villa Somalia [Presidential Palace] security force has been fired after he disagreed with the decision to remove Speaker Jawari’s security detail," he added.

The government has withdrawn Jawari's bodyguards and detained scores of army soldiers for going into the parliament with weapons that prompted da fierce deadlock between the MPs and led to the cancellation of Wednesday's session.

Following the removal of the Somali guards, troops from AMISOM - the African Union Mission in Somalia have now fully taken over the security of the speaker who is at loggerheads with the Prime Minister Hassan Ali Khaire.

Jawari has been the Speaker of Parliament since August 2012.

Last Saturday, on 31st March, Somali President Mohamed Abdullahi Farmaajo suspended a parliament session expected to vote on the impeachment motion to ease the tension that split the MPs into Pro-Jawari and Pro-Khaire camps.