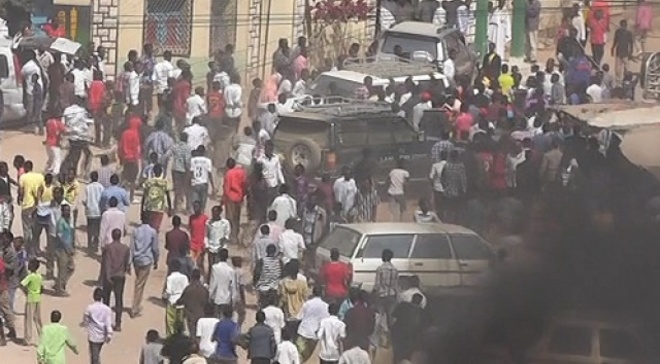 Opposition leader Abdirahman Mohamed Abdullahi Irro announced state-wide protests against the decision to extend term for President Siilaanyo, Vice President Abdirahman Saylici, Parliament and the House of Elders by a 30-member committee within the region’s forum for traditional affairs.

In the second largest city, Burao Wadani party supporters poured into the streets, setting tires alight and chanting slogans at protest of the term extension.

Fears of violent protests are also looming in the capital Hargeisa and Erivago where police forces have arrested opposition figures.

The banner-waving crowds were hurdling stones at security forces as they tried to break up anti-government marches in Togdher regional capital of Burao, witnesses told Garowe Online.

House of Elders set 27 April 2017 for the end of President Siilaanyo’s term in office, with parliamentary and general elections slated a month ahead.

On May 3, Chairman of traditional forum Saleban Mohamud Adan (Saleban Gaal) unveiled that elders will hold intense discussions on presidential term extension with the main opposition parties, Justice and Welfare party and Wadani.

Buroa is among election strongholds of Parliament speaker and Wadani party leader Abdirahman Irro, a frontrunner for the top political job in a region relatively known for democratic credentials.

Somaliland, located in northwestern Somalia declared its independence from the rest of the country as de facto sovereign state in 1991 but it has not been recognized internationally yet.