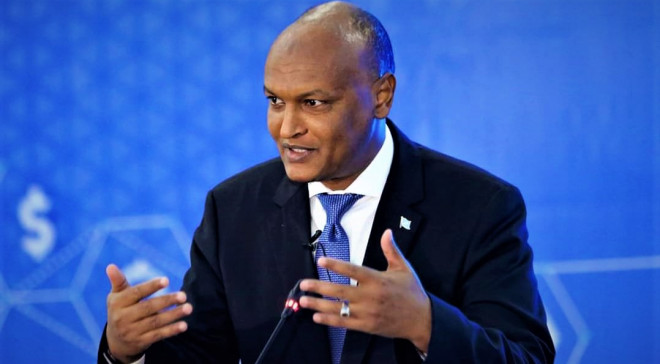 MOGADISHU, Somalia - Somalia does not have plans of sharing oil revenue with Kenya, Deputy Prime Minister Mahdi Gulaid has said after reports on a purported deal between Nairobi and Mogadishu on a controversial Indian Ocean maritime border dispute surfaced on local media in Kenya.

The two countries are wrangling over the oil-rich Indian Ocean maritime border, with Somalia accusing Kenya of grabbing some sections. The case is currently at the International Court of Justice [ICJ] at the Hague and the hearing was done in March.

In a tweet, Gulaid, a close ally of President Mohamed Abdullahi Farmajo, who has also been following the case keenly, termed the reports of sharing revenue from the disputed area on a 50/50 basis as "baseless", adding that there were no such talks.

According to the DPM, Somalia is comfortable with waiting for the outcome from the International Court of Justice, adding that there were no plans to strike a deal with Kenya. Nairobi has reportedly been pushing for an out-of-court settlement.

"Media reports that Somalia and Kenya are in agreement to divide the proceeds of oil and gas 50/50 are baseless and untrue. We are awaiting fair judgment by CJI-ICJ on the maritime dispute," Gulaid said.

His tweet comes few days after he had ruled out settling the matter out of court after Somalia restored diplomatic relationship with Kenya following interventions by Qatar. Hed had said: "The maritime dispute will be finalized by the CIJ_ICJ following oral hearing was completed on March 15-18 this year. We are awaiting fair judgment. Diplomatic relations b/w the two countries are a separate issue."

In a report published by Kenya's The Star, Qatar, which initiated the restoration of ties between Kenya and Somalia, the two countries had reportedly agreed to share revenue from the disputed area on a 50/50 basis with the deal expected to be signed in Doha soon.

Qatar has a major interest in Italian international Oil giant Eni which is carrying out explorations on some of the blocks in the disputed territory, reports the Star, which claims to have got hold of the deal.

Qatar Petroleum also signed a deal with Total, a French multinational oil and gas company which alongside Eni has ownership of the oil fields for a 25 percent stake at offshore L11A, L11B, and L12 blocks, which are not part of the dispute.

Total made an entry in Lamu Basin in 2011 when it acquired 40 percent interest in five exploratory blocks- L5, L7, Lila, LI lb, and LI 2 from Anadarko Kenya Co, Dynamic Global Advisors, and Cove Energy PLC. Eni has a 41.3 percent participating interest while Total has 33.8 percent.

The oil blocs sold to Qatari are said to be approximately 15,000 square feet with water depths ranging from about 1,000 meters to 3,000 meters. It had planned initial exploration mid-last year but shelved plans for an unknown reason.

Previously, Kenya had managed to have the case postponed thrice but her fourth application was rejected by the court. The hearing was done in March and a judgment is expected to be issued in the coming days. Somalia is optimistic of a favorable outcome.

A Qatari diplomatic official in Nairobi however said that healthy diplomatic ties between Kenya and Somalia are what motivated the gulf nation to mediate and resolve hostility arising from the disputed maritime dispute.

The official who sought anonymity citing the sensitivity of the matter denied reports that Qatar was protecting its interests in the oil and gas blocs in the Indian Ocean.

''It is true that the Government of Qatar bought three oil exploration blocks in the Indian Ocean within Kenya's territory through Qatar Petroleum in 2019. However, those blocs are not part of those contested by Kenya and Somalia,'' he said.

He added Qatar is a key trading partner of both countries and any disharmony was bad for business.

The truce between Kenya and Somalia was announced moment after Qatari Emir Sheikh Tamim Al Thani sent his special envoy Mutlaq bib Majed al-Qahtani to Mogadishu and Nairobi. However, the relationship might have taken a nosedive when Kenya suspended flights to Mogadishu a few days later.