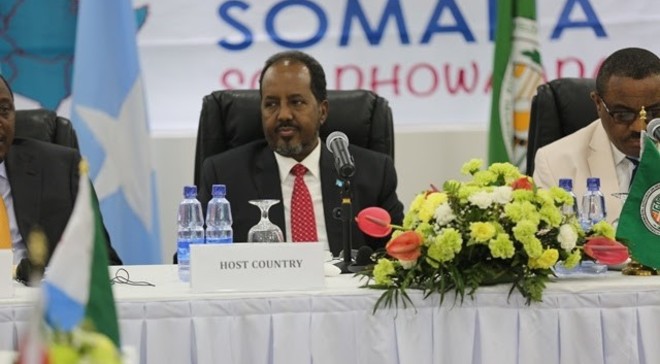 MOGADISHU, Somalia- A controversial report released by an Ethiopian think tank linked to Ethiopia's Foreign Ministry has caused a stir in the country, following recommendation to support the re-election bid of caretaker President Hasan Shaikh Mahmoud in the forthcoming election, Garowe Online reports.

As the presidential election is approaching, CDRC revealed the complexity to forecast the level of support each presidential candidate has among parliamentarians, which attributed to their affiliation to different groups, including Al Shabaab militant sympathizers.

“The Parliament is mainly composed of young politicians associated with the diaspora, Damul  Jadiid (New Blood) affiliated Ministers who see challenges to their future  reappointment, and sympathizers of Al Shabaab and other groups. Shifting alliances and counter-alliances between secularists and religiously motivated MPs, rich MPs and financially insecure ones, between religious groups (Salafists, Sufists and Wahabists, “reformists Islah and Damul Jadiid” and the die-hard Al-Itisam) and others are expected to inform its proceedings in the immediate future,” read the report.

Additionally, CDRC stated that Somalia’s partners and regional powers are exerting considerable influence in favor of their presumed candidates, meanwhile claiming supporting the incumbent caretaker Mahmoud would “crystallize the process of institution building and governance.”

“Such an approach hinges on experience in Somalia, where change in leadership often entails a complete destruction of existing structures and systems, leading towards a perennial dissolution of government institution and loss of institutional memory.”

But this was strongly rejected by politicians and parliamentarians, who argued that Mahmoud’s administration has failed miserably to install security, governance, development and reconciliation in the past 4 years, and re-electing Mahmoud will ensure only the continuity of the corrupt and malfunction system.

On the other hand, CDRC stated that other regional powers are in favor of caretaker Prime Minister Omar Abdirashid Ali Sharmarke for the presidency, including Kenya, claiming that a covert agreement between Sharmarke and Kenyan government of favorable settlement of the offshore territorial dispute between Somalia and Kenya has prompted the latter’s to support his campaign.

“It is notable that previous commitments between Kenya and an active government from the Middle East demanded that the current President vacate the post to the incumbent Prime Minister. Money obviously changed hands in this process as well. Moreover, a number of oil companies that have a stake in the offshore oil exploration in the areas where Kenya and Somalia have disputes are also meddling in the campaign. Hence, one can clearly see the web of conflicting interests already tampering with the presidential election in Somalia.”

On the other hand, CDRC has discussed the power-sharing formula (4.5) between Somali clans, which is designed to ensure fair representation among major clans and minority groups in the government system.

However, it caused outrage among public following recommendation to maintain the Somali leadership to particular clan over other major clans.

“Based on historic and current realities, allowing the Hawiye to keep the Presidency might be a wise move.”

However, Somali politicians, parliamentarians and presidential candidates have slammed CDRC for meddling in the Somali affairs and accused it of supporting candidate who maintains Ethiopia’s interest in the country at the detriment of other presidential hopefuls.

According to pundits, the report was released in a critical period aimed to boost  Mahmoud’s bid amid stiff competition from other major opposition candidates who are vying to unseat him in the upcoming election.

Yesterday, Somalia has concluded the election of Federal Parliament's leadership, which will pave the way to prepare for Somalia's presidential election set to be hold in the coming weeks in Mogadishu.