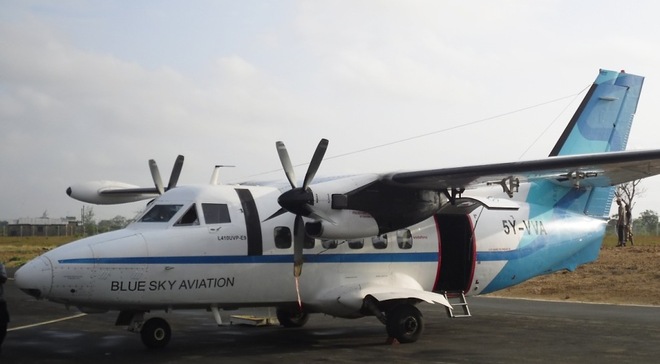 MOGADISHU, Somalia - Somali government has reportedly revoked licenses for two aviation companies registered in Kenya, citing smuggling of Khat and violation of COVID-19 regulations as the motivating factors, in a move that could test the fragile relationship between the two countries.

According to multiple sources within FGS, the Transport and Aviation Minister Mohamed Abdullahi Omar revoked the licenses for Buff Air Services and Silverstone's Airlines for violating the rules, but the communication is yet to be made public.

The two airlines, insiders say, have been smuggling Khat worth millions of dollars in the pretext of "medical supplies", a move which angered authorities when the tricks were unearthed. The airlines, sources added, have also been violating COVID-19 rules.

With the number of infections almost reaching 2,000, Somalia had imposed stringent measures including suspension of passenger flights besides banning of transportation of Khat throughout this period the Horn of Africa nation is fighting COVID-19.

Only cargo planes mostly those cleared for ferrying of medical supplies are allowed to use Somalia skies. The country depends on air transport due to poor infrastructure, given the unending inter-clan conflicts and Al-Shabaab menace.

But in recent months, there has been a spirited campaign from certain NGOs geared at permanently banning the use of Khat in Somalia. The drug, which is majorly exported from Kenya, has been attributed to poor output in Somalia's economy given that addicts "spend most time chewing it".

Insiders told Garowe Online that the two companies have been delivering the crop at Buhodle and Jowhar airstrips, avoiding the busy Aden Adde International Airport, where protocols are strictly adhered to. One of the aircraft was pictured offloading Khat at Buhodle on May 26 while another one at Jowhar five days later, reports indicate.

"They had their licenses revoked following investigations which have been going on for a while now," a source said. "We are, however, not certain that the government will reverse the situation. It's quite agitated with the breach of protocols."

Somalia is a major market for Khat from Kenya, which fetches farmers mainly from Mt. Kenya East millions of dollars. Nairobi has heavily invested in the crop, which closes to $10 million allocated this coming financial year [2020/21] solely for the resuscitation of the Khat business.

Efforts to reach the affected airlines were fruitless until the time of publishing the story. Silverstone, which is active on the Twitter handle, had not responded to queries from Garowe Online over the latest suspension of the permit.

Last year, the company was put on the spot after two of its aircraft were involved in accidents. One of the aircraft skidded off the runway at Wilson airport while another one had to make an emergency landing Eldoret International Airport, around 400 kilometers northwest of the capital, Nairobi.

The suspension also comes just a few days after two Kenyan aircraft operating on Somalia skies came under attack, a move that attracted retribution from authorities in Nairobi, who have since out the Horn of Africa nation into defense.

One of the planes, 5Y-VVA was shot at while almost landing at Qansahdere airport within the Bay region but no casualties were reported. Bay region is found within the troubled Southwest state of Somalia.

Abdirazak Abdi Ibrahim, the mayor of Qansahdhere, told Voice of America that the plane was about 7 kilometers away from landing before it came under attack. According to him, suspected Al-Shabaab militants used motorcycles to get closer to the airport before firing.

In an earlier incident recorded on May 4, a contingent of ENDF troops who are not part of the AMISOM component, shot down another Kenyan aircraft Ambaer 120-5Y AXO minutes before landing at Bardale airport in Southwest state, leaving six people dead. The aircraft was supplying medical aid from Baidoa.

The incident, which is under active investigations, is linked to the strained relationships between Kenya Defense Forces [KDF] and their counterparts from Ethiopian National Defense Forces [ENDF], who are said to be acting on orders from Somalia government.

Besides the airline and peacekeeping troops controversy, Somalia is also embroiled in a bitter Indian Ocean maritime dispute with Kenya. International Court of Justice postponed the case for the third time last month due to COVID-19, scheduling hearings to March 2021.