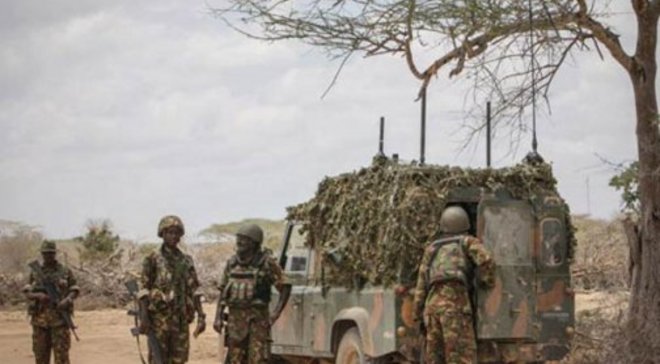 Local residents reported that a roadside bomb has ripped through KDF convoy serving with the African Union peacekeeping troops (AMISOM) in Somalia, while traveling in between Abdalla-Biroole and Kismayo, and followed by heavy gunfire.

“We heard a heavy explosion, then a plume of thick smoke from the scene rose to the sky and everyone fled the area as KDF soldiers started shooting” said witness in Abdalla-Biroole.

Reports from Kismayo indicates that there are some casualties among the KDF forces in the convoy, but can't be independently virified. Sources said soldiers from the Kenyan forces are feared dead, after their convoy was hit by a roadside bomb, however, AMISOM is yet to release any statement concerning the ambush attack.

This comes amid reports that Jubbaland state forces, along with the support of AMISOM and US military are preparing to launch anti-militants operations to drive out Al shabaab group from the entire region.

Since the recapture of Kismayo town in 2012 and pushing out Al Shabaab group, KDF bases in Jubaland region have witnessed frequent sporadic attacks from the militants who are aiming to topple the Western-backed Somali government to enforce it's own strict version of governance.