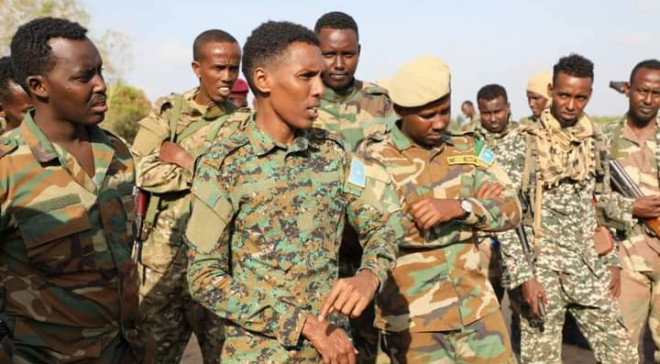 MOGADISHU, Somalia - In what could be a major step towards taking security responsibilities in Somalia, the Somali National Army [SNA] continued with a crackdown against Al-Shabaab over the weekend, claiming victories in two separate operations in central and southern parts of the country.

Al-Shabaab still controls large swathes of rural central and southern Somalia, but the group has considerably lost in recent months due to spirited operations by security forces, mostly the SNA troops with assistance from those serving in AMISOM.

In their Twitter account, the SNA team confirmed killing 15 militants on Friday at Gal-labashiir in Middle Shabelle, in an attack that leftover 20 militants severely injured. This was one of the major operations in as many months within the country.

On Saturday, the troops continued with their operations in the central parts of the country within Galkayo-Harareey, a town that has been persistently under Al-Shabaab attack in recent months. The town is found in Galmadug state.

During the operation, SNA said, at least 37 militants were killed, taking the number to 52 within just 24 hours. Two attackers were captured during the operation and will now have to spend in military detention for further scrutiny.

"The SNA troops carried a planned attack at Galkayo-Harareey where the militants were stationed. At least 37 militants were killed during the operation while two others were captured," SNA added.

Al-Shabaab on their side claimed SNA commander Gen Odawaa Yusuf Rageh survived a bomb attack in Middle Shabelle. The top military officer was in the combat team that has been leading operations within the country.

SNA did not confirm or deny the alleged bomb blast targeting Chief of Defense Forces Gen. Yusuf Rage Odowaa, but it's clear he was on the battlefield. The 35-year-old general is one of the youngest top military commanders in the young army that is rebuilding after years of shambles.

Meanwhile, reports from the Qooqani area of Jubaland indicate that a landmine blast targeted a senior Jubaland security commander named Aidid Abdullahi. The commander and seven of his soldiers have died as a result of the explosion.