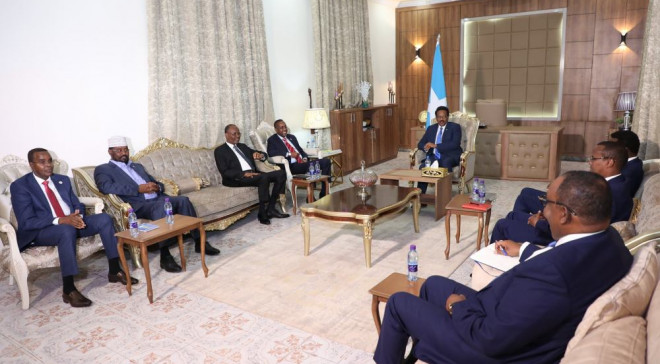 DHUSAMAREB, Somalia - Uncertainty looms large in Somalia after leaders of the Federal Government and the Federal States failed to reach a deal on contentious issues over the upcoming elections during a three-day meeting in Dhusamareb.

The split comes as the president's term expires on 8 February.

The impasse over the Gedo issue sparked the meeting to end in failure as President Ahmed Madobe refused the government to manage the electoral process in Jubaland, especially in Garbaharey, where 16 Federal MPs will be elected.

According to Swan, the 17 September election model must be respected and all political parties are obliged to follow through with the agreement.

But President Farmajo insisted that his government will take charge of the management of one constituency in Jubaland which is his hometown Garbaharey, an attempt that Madobe rejected.

Jubaland president told the reporters in Dhusamareb that Farmajo is sowing division among the people in his State and creating a new conflict in Somalia for his personal gains.

Among the contentious issues include the election of the Members of both levels of parliament from Somaliland – a secessionist northern region that will be elected in Mogadishu. This has been resolved.

The conference in Dhusamareb, some 400 km (250 miles) north of the capital Mogadishu was the latest effort to break an election deadlock and avoid a constitutional crisis in Somalia.

Farmajo is expected to return to Mogadishu in the coming hours to address the national assembly amid division among the two houses over the session as the Senate announced it received no official request from the president over the joint sitting.

Madobe accused Farmajo of destroying the agreed-upon federal power structure after declining to allow his administration to oversee the Garbaharey election, a case that highlights the tensions is Gedo, where the government sent troops to the region near the Kenyan border last year.

Since last year, Puntland and Jubaland as well as the Union of the presidential candidates have been asking for the federal troops to leave, but Villa Somalia refused and ignored the calls, sparking a crisis.