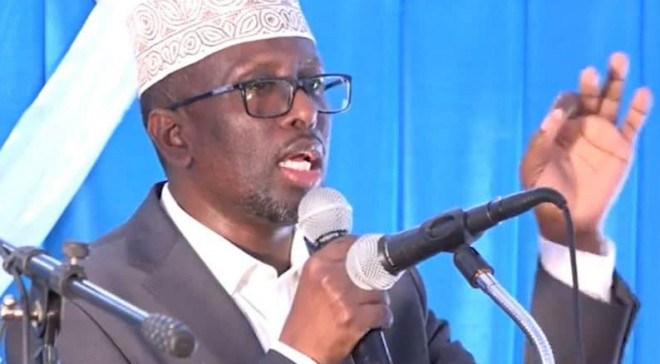 MOGADISHU, Somalia - On Friday, Somalia's opposition would stage one of the largest protests in the country, former President Sharif Sheikh Ahmed said, in what is aimed at piling pressure on the outgoing President Mohamed Abdullahi Farmajo to pave way for genuine dialogue, over the electoral crisis.

The country is starting a limbo after months of disagreements, which have resulted in an unprecedented deadlock, that has put the country on a downward trajectory. Elections were scheduled for December last year but the country's leadership failed to find a clear path for the implementation of the pre-election deal.

Even to date, already the term of parliament and that of President Mohamed Abdullahi Farmajo has since expired, further raising questions about the legitimacy of the decisions that emanate from presidency and parliament, which are now being termed unconstitutional.

In a press statement on Sunday, Sharif Sheikh Ahmed, the seventh president of the Federal Republic of Somalia, said the opposition will be marching in the streets of Mogadishu, adding that it will be the first among many protests that are planned in future within Somalia.

While addressing the media, Ahmed Sheikh, who is credited for the onslaught against Al-Shabaab militants within Mogadishu, said Farmajo is in office "illegally" his term having ended on February 8. This means he's been in office illegally for six days, he told the media.

His successor Hassan Sheikh Mohamud backed calls for dialogue, arguing that there is need for the country to ensure full implementation of the September pre-election deal that was signed by the federal government and member states in Mogadishu.

"The only path to attain consensual and inclusive elections is to resume the talks and resolve the outstanding issues regarding the 17 September 2020 election agreement. We reaffirm our gratitude to Somalia's international partners for their continued positive contribution," he said.

Farmajo called for another round of talks starting today but until this morning, the venue was not yet clear despite pressure from the international community.

While Farmajo is of the opinion that the conference takes place in Garowe, the regional administrative capital of Puntland, other stakeholders are pushing for Mogadishu.