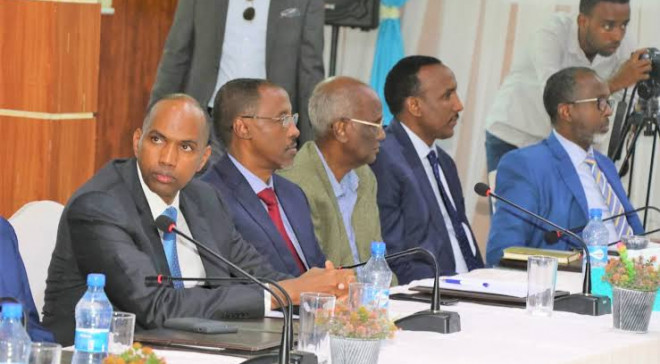 MOGADISHU, Somalia- Somalia's much-anticipated polls suffered yet another blow on Saturday after the coalition of presidential candidates rejected the electoral committee, arguing that President Mohamed Abdullahi Farmajo has "blatantly" refused to listen to their pleas.

The country has run beyond the schedule after elections failed to start on December 1, 2020, with elections of senators being on the offing, and the situation might get out of hands and probably plunge the country into unforeseeable uncertainty for a long time.

In a press statement on Saturday, the team comprising of 14 candidates picked a parallel elections committee which they named "national salvation electoral committee" that is expected to run elections, and which will rival the one picked by President Mohamed Abdullahi Farmajo.

The committee, they added, "will rescue the people of Somalia from the unwarranted dictatorship that has been the order of the day for the last four years". The team said it will do "all we can to save Somalis who have been yearning for good leadership and democracy for all these years".

Should Farmajo fail to yield to their pressure, they said, "he will be held liable for consequences that will follow thereafter". They asked the international community to ensure they chip in and try to resolve some of the issues that have dragged the elections.

The disputed Somalia's election commission has picked Mohamed Hassan as the new chairman and deputized by Mowlid Matan. However, Jubaland and Puntland have no representatives in the poll body with its members mostly believes to be from the National Intelligence and Security Agency and government employees as per the per opposition.

But the government has repeatedly dismissed claims that the NISA operatives are directly involved in the polls. The opposition team has repeatedly called for the resignation of NISA boss Fahad Yasin, a close ally of President Mohamed Abdullahi Farmajo.

With time running out, it's difficult to tell if the team shall reach a compromise and allow elections to go on as planned. Among those pushing for consensus are former Presidents Sharif Sheikh Ahmed and Hassan Sheikh Mohamud along with former Prime Minister Hassan Ali Khaire.