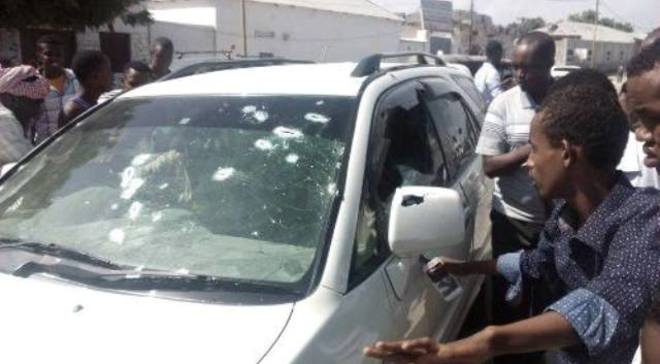 MOGADISHU, Somalia - A senior Somali Intelligence official and his security guard were shot dead in a drive-by shooting in the capital, Mogadishu on Sunday, Garowe Online reports.

Mohamud Hassan Moalim aka (Qooley) has succumbed to severe wounds sustained in the attack carried out by suspected Al shabaab gunmen at Hoosh nighbourhood in Mogadishu's Dharkenlay district.

Police said late Moalim, who was the head on Intelligence in Kahda district has been critically injured, when gunmen in a car blocked his route and sprayed the car with bullets, killing his bodyguard on the spot.

The assailants sped off in a Toyota NOAH from the crime scene, before the arrival of the Somali security forces, who launched an investigation and a manhunt mission to capture the suspects.

The incident was the latest in series of assassinations against Somali Federal government officials, civil servants and security force members in the seaside capital, Mogadishu, some claimed by Al shabaab.

Last week, the National Intelligence and Security Agency (NISA) officers seized a vehicle and a suspected Al shabaab member, in connection with the attacks and targeted killings in Mogadishu.

The security of the city has been improving since the launch of the Mogadishu stabilization Mission last June, in a bid to avert Al shabaab raids on hotels, public places and government installations.