Somalia: SNA, AU forces beef up security ahead of Ramadan 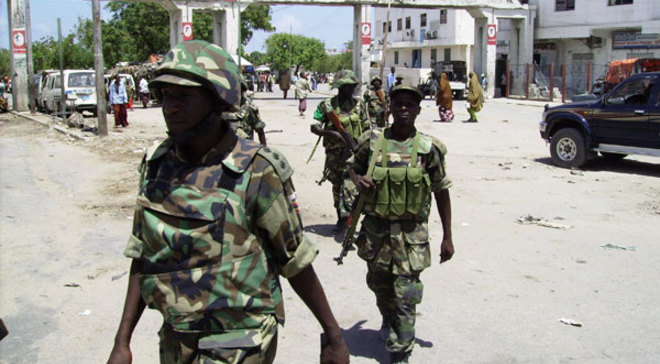 Speaking to the media, Brig Paul L’Okech, the commander of Ugandan forces of AMISOM contingent said the assignment will largely be done by the Somali National Army [SNA] and the Local Police.

L’Okech said AMISOM and Somali forces will carry out pre-emptive measures to avert Al-Shabab attacks in the capital and its environs ahead of Radaman.

"Al Shabab is often stepping up terrorist attacks in Mogadishu during Ramadan, so we have prepared pre-emptive measures to counter the group's attacks,” Brig L’Okech said.

He added that the main targets for the militants usually include common meeting places such as markets, hotels, AMISOM military bases and other busy centers in the seaside capital city.

The commander has called on Somali and AMISOM troops to be more vigilant and ready to reinforce the security and interact with local residents in case of attacks.

Despite having lost most of its battle fronts to Somali and AU forces, Al-Shabab remains a threat as It has carried out a string of attacks, including car bombings in Mogadishu and elsewhere in the country.