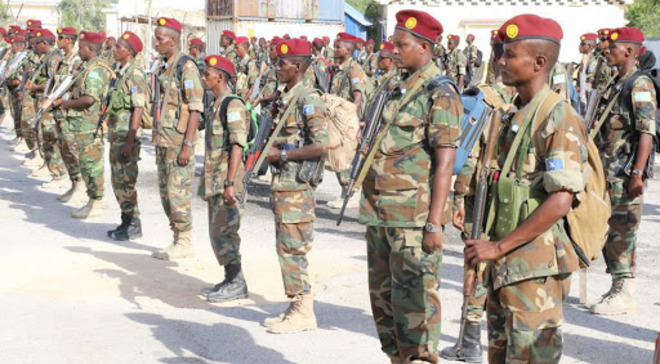 MOGADISHU, Somalia - Dozens of troops donned in Somali National Army [SNA] uniforms staged a mutiny in the streets of Mogadishu on Sunday, temporarily causing tension in a rather peaceful city, which is struggling to eliminate ghosts of Al-Shabaab militants, who lost ground in the city in 2011.

Footages taken from several streets show the agitated soldiers blocking roads leading to Villa Somalia, which hosts the president of the country, with the police watching the unfolding events helplessly just like ordinary civilians.

At some point, some civilians were seen helping the disgruntled soldiers to mount rocks on major exit roots within the town as the officers brought traffic into a standstill in the city, which is normally busy. Sunday is a working day in Somalia, whose citizens are majority Muslims, who worship on Fridays.

Armed with AK 47 rifles, the soldiers made several rounds within the capital before addressing curious journalists, who had gathered by to follow the rare incident. The troops were mainly from junior ranks within the SNA, based on their identification marks in their official military fatigues.

Some who addressed the media near the presidential palace accused authorities of "failing to pay us" despite the fact that "we have been working hard to eliminate the enemy, who has antagonized our people". According to them, the government owes most over them 20 months dues.

In their own account, they had been participating in battles against Al-Shabaab in Lower Shebelle region, which had witnessed massive crackdown waged by SNA, African Union forces, and US Africa Command in recent months.

During the press conference, the soldiers who spoke randomly without identifying themselves confirmed that they belong to SNA's 27th Division, which is mainly based in the Hiran region of Middle Shebelle, which has also reported cases of Al-Shabaab attacks.

The soldiers deserted their stations in Jowhar and Bal'ad regions, reports indicate.

For instance, the Al-Shabaab militants waged attacks in an AMISOM base with Hiran region last week but they were repulsed by Djibouti AMISOM troops and those from SNA. Several militants were killed during the melee, officials said.

During Sunday's protests, the SNA troops temporarily blocked AMISOM tanks within the capital as a sign of displeasure with the administration of President Mohamed Abdullahi Farmajo, who had been tasked to build a strong army for a stable Somalia.

The mutiny comes amid increased Al-Shabaab attacks within the Horn of Africa nation, which have left dozens of people among them civilians dead especially within central and southern Somalia, which are currently under the surveillance of security forces.

On Saturday night, at least 12 people were killed at Wanlaweyn town in Lower Shebelle, following double IED explosions which targeted a senior SNA commander whose name is yet to be disclosed. The victims were blown in the second round of explosion after rushing to the scene, reports indicate.

And on Sunday morning suspected Al-Shabaab militants used a Vehicle-Born Improvised Devise in an attempt to run over a military base Ba'adweyn, a town within Mudug region, an incident which left several SNA troops dead according to eyewitnesses.

No group is yet to take responsibility for the attacks in Ba'adweyn and Wanlaweyn respectively, but the Al-Shabaab militants usually execute their attacks using a similar version. The group normally uses proxy media outlets to claim responsibility.

But on a positive note, at least three militants had on Saturday surrendered to SNA troops in Mudug, which has been turned to a battlefield between the government forces and Al-Qaida linked group; Al-Shabaab, who are fighting to topple the fragile UN-backed Somalia government.

Gen. Abdiaziz Abdullahi Abdi, the commander 21st battalion of SNA, told reporters that the three will be repatriated successfully. According to him, the government is using an amnesty signed in 2014 to receive defectors without discrimination.

Several other militants have surrendered across the war-torn nation, which has been experiencing instability since independence, particularly after the take over by Gen. Siad Barre, who was toppled in 1991 after years of civil war.

The federal government of Somalia has been experiencing a financial downturn, which has been worsened by the novel Coronavirus pandemic. About 3,000 have been infected by the virus which has literally impaired economic growth across the globe.

But instances of soldiers going months without pay are not new in Somalia. For instance, the US, which is responsible for the training of elite Danab forces, had stopped pumping aid to SNA troops, citing instances of corruption and financial impropriety within the top echelon of the military.

But in February, the United States resumed direct financial and security support to Somali National [Army SNA], Ryan Grizzle, a spokesperson, said, adding that "the assistance will be, however, limited".

The support, which mainly focuses on food, fuel, and stipends for the troops. Operations had been suspended after the withdrawal of the US, even leading to a mass exodus of SNA troops, further weakening the fight against the Al-Shabaab.

Washington lauded FGS for "improving the financial management of SNA" as part of the ongoing institutional reforms in the armed forces. The reforms, Grizzle said, "gave the United States increased confidence in accountability mechanisms for donor resources".

Somalia, the US added, should continue prioritizing security sector reforms, including asset management and human resources, as part of the comprehensive effort to build and sustain capable, professional security forces.

For the support to continue, Grizzle warned, "the US will only continue support to SNAF operations that are focused on defeating terrorist organizations." The US and European Union are major sponsors of SNA, which is supposed to take over security responsibilities from AMISOM in 2021.

For months now, radical reforms have been executed within the military, including the recruitment of qualified youths and promoting youthful soldiers to higher ranks. For instance, Farmajo appoints Yusuf Rageh, 33, as the army general last year.

There have been also efforts to register the troops on biometrics to avoid inconsistencies during payments. Soldiers are also nowadays paid their dues through bank accounts, contrary to the past where they used to queue for payments.

“If we recruit our forces based on clan, then the foundation of our forces is wrong," Farmajo said, in a statement which was backed by Somalis, with many arguing that claim has been an impedance to the much-needed peace and stability.

To achieve this, Farmajo said, the government is also focused to ensure radical reforms in the military's human resource management, which had previously raised questions from among stakeholders.

"We're seeking professional, disciplined, and accountable forces. The first step is a Human Resource Management system with up to date personal records," he said. In recent weeks, those enlisted have their biometrics and other records stored digitally.

While opening the 7th session of parliament early this month, Farmajo, who hailed the troops for their "unrelenting" efforts to keep Somalia safe, said FGS has been paying the troops their monthly dues based on recommendations put forth by a committee in charge of reforms.

Those who protested on Sunday did not reveal whether they had been registered through the recent biometric screening. Until now, no official communication has been given by the government or the SNA commanders, who usually communicate to the public using their social media accounts.

The African Union Mission in Somalia [AMISOM], is set to withdraw close to 20,000 troops who have been keeping peace in Somalia for the last decade. Kenya, Ethiopia, Burundi, Djibouti, and Uganda are some of the force contributing nations.