​Somalia swears in a new Parliament in Mogadishu, security beefed up 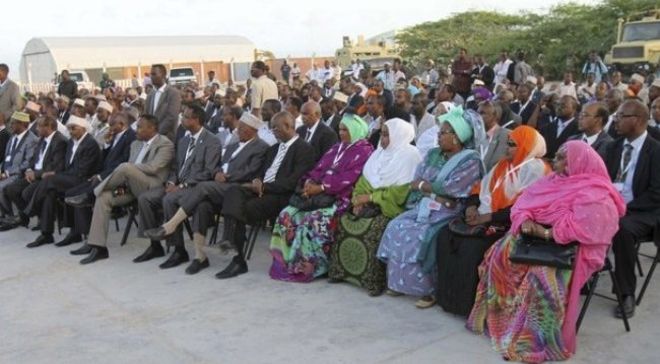 MOGADISHU, Somalia- Somalia is scheduled today to swear-in its newly elected Federal MPs in a ceremony at the Police Academy headquarters in the capital Mogadishu, under tight security arrangements, Garowe Online reports.

A total of 251 MPs and 43 Senators are expected to be inaugurated in the capital, whereas the process to complete voting for the remaining parliamentarians is ongoing.

The new Parliament was set to be inaugurated in December 15, but postponed due to delays in the elections in the regional states and lingering disputes over nullified seats by Independent electoral dispute body.

However, today's event is taking place as the National Leadership Forum (NLF) has issued yesterday an amended list of 5 nullified parliamentary seats, which was reduced from the original list of 11 seats nullified by the electoral dispute body due electoral malpractices and vote rigging.

The new list to be re-elected, include the candidate Abdulkadir Gafow Mohamud, brother of chief of the National Intelligence and Security Agency (NISA) Abdullahi Gafow Mohamud who was elected in Galmudug state.

The international community has earlier expressed concerns to the parliamentary elections that was marred by irregularities and corruption, and urged Somali leaders and electoral bodies to take actions against seats that were triumphed through misconduct and malpractice.

After taking the oath today, the new members of Parliament are set to vote for the new Speakers of Lower and Upper Houses in secret ballots, which will follow by a similar process for the President in January 2017, according to the schedule.

Security forces were deployed into the main roads in the capital, especially around the Police academy where the swearing-in event is underway.