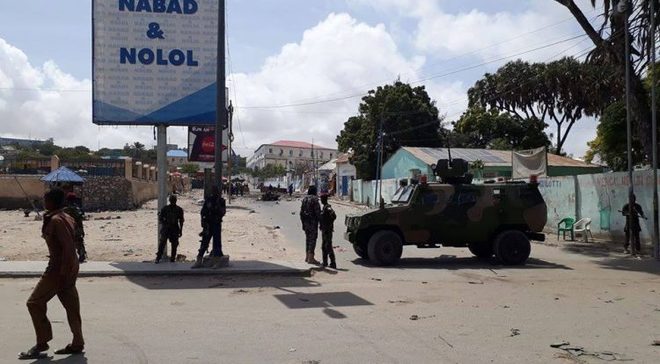 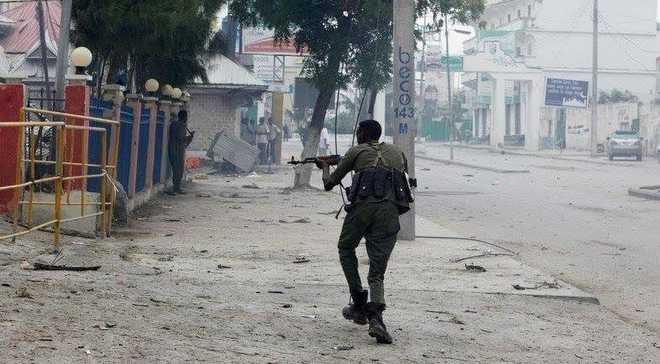 According to the witnesses, armed militants in a vehicle sped toward the palace and encountered heavy resistance from the presidential guards at a checkpoint and a gunfight broke out there.

A heavy gunfight between the attackers and Somali security forces erupted in the heavily-fortified area, close to SYL hotel and Peace garden at around 12:00 am local time before the second car bomb took place a few minutes later.

The unrest lasted for nearly an hour.

Somali authorities said at least three militants were shot dead as Security forces battled the attackers trying to storm the presidential palace after setting of two powerful car bombs at the gate.

Five militants were involved in the attack - two bombers rammed the vehicle-borne improvised explosive device (VBIED) into the security checkpoints and three attackers who have been killed during the gunfight.

Graphic Pictures posted on social media showed dead bodies said to be attackers who attempted to storm the palace. They were wearing Somali army uniforms and armed with AK-47 rifles.

The Islamist militant group al-Shabab, which has been trying to oust Somalia's government, says it was behind Saturday’s attack in the capital, which was the latest in series of bombings and killings in the city.

Today's attack happened shortly after President, Mohamed Abdullahi Farmajo left the country for Brussels, Belgian capital for Somalia Partnership Forum which will kick off next Monday, the 16th July.

Last October, more than 500 people were killed, hundreds of others wounded by a truck bomb at Km5 junction in the capital. Officials blamed al-Shabab but the group never said it was behind that attack.