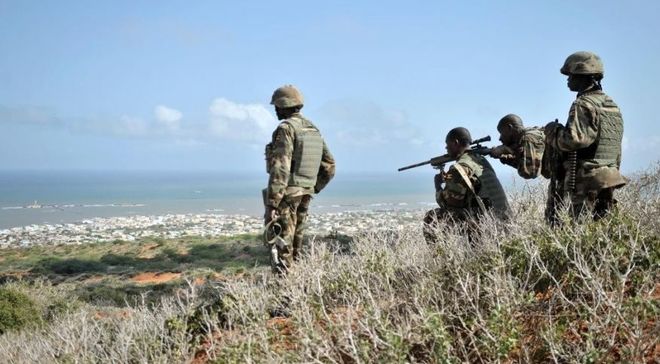 BARAWE, Somalia - At least 3 people were killed and seven others wounded after heavy fighting broke out between the Somali army and Al-Shabaab near Barawe city on Thursday, Garowe Online reports.

Aden Omar, the commissioner of Barawa in Somalia’s southern Lower Shabelle region, told GO over the phone that the fighting began after al-Shabaab fighters attacked a Somali national army and AU bases.

“Three militants were killed and several others wounded during the clash which erupted after attacking the military bases manning by Somali troops and the African Union peacekeepers," Omar said.

The official added that two government soldiers have sustained injuries in the attack and admitted to a military hospital belonging to Ugandan forces of AMISOM contingent in the coastal town for treatment.

Meanwhile, Al Shabaab group said it attacked Uganda troops protecting a new airstrip which is under construction in Ambareeso area, about 7Km away from the port town, killing AU soldiers.

Barawe is a strategic ancient port city, located some 179Km southwest of the Somali capital Mogadishu and it has been under Al-Shabaab control for 6 years before Somali and AU forces pushed them of the town in 2014.