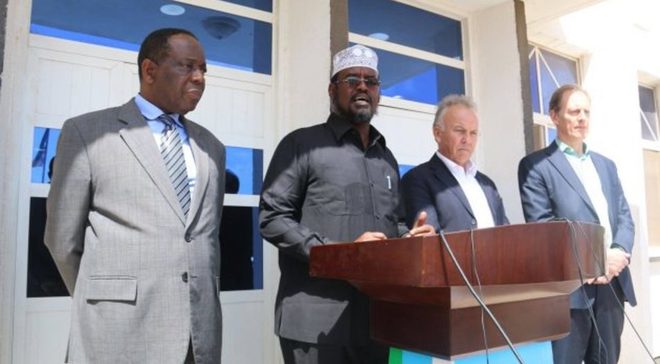 KISMAYO, Somalia- The President of Jubbaland State of Somalia have on Sunday received high-level delegates from the International community in Kismayo, Garowe Online reports.

The delegate led by the UN special Representative for Somalia Michael Keating and Francisco Madeira, the African Union envoy for Somalia and head of the AU mission in Somalia (AMISOM).

The delegate was warmly welcomed at the Airport by Jubbaland President Ahmed Madobe and state officials, and then held meetings at the Presidential Palace.

Sources said the meetings have focused on security, drought crisis and providing support to Somali returnees returning from Dadaab, world's largest refugee camp in Kenya back to Jubbaland regions.

The recent election in Mogadishu was among the agenda of the meeting. Keating and Madeira called on Jubbaland to work with the new President Mohamed Abdullahi Farmajo and his incoming government.

Madobe and Keating briefed the media over their meeting, and said they have agreed to provide support to drought-affected families, cooperation with the new federal government.

This comes following the election of a new President who reported he held meetings with some state leaders before his inauguration ceremony scheduled next week in the Somali capital of Mogadishu.