Somalia: UN calls for support to transition plan in Somalia 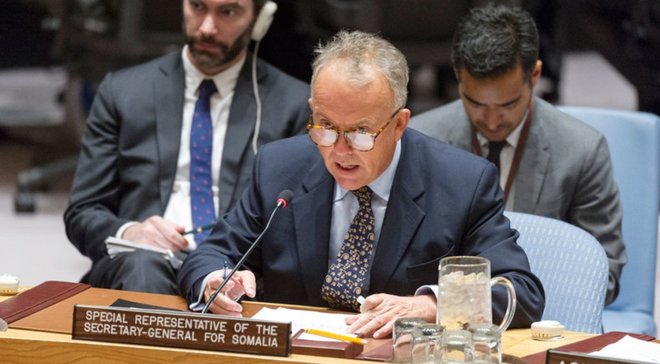 MOGADISHU, Somalia -- The UN envoy in Somalia has called on the international community to support a transitional plan that seeks to transfer security responsibilities from African Union (AU) troops to the country's own security forces.

Michael Keating, the UN Secretary-General's Special Representative for Somalia, said the success of the transition plan depended on its endorsement by three constituencies -- the Somalis, the AU mission in Somalia (AMISOM) and international partners.

"The most important of those three constituencies is the Somali one," Keating told a high-level meeting of Somali authorities and international partners in Mogadishu on Thursday.

Participants at the meeting formally adopted the transition plan ahead of a high-level conference on Somalia's security scheduled to take place in Brussels next week.

According to a statement issued on Thursday night, the UN envoy noted that the transition plan is on the UN Security Council's agenda, and he urged international partners to back it.

Efforts to advance Somalia's progress on the security front were the key topic at the meeting which saw participants underline the need for continued momentum on the implementation of the Comprehensive Approach to Security, which is part of a security pact agreed by Somalia's leaders in 2017.

Francisco Madeira, the Special Representative of the Chairperson of the AU Commission for Somalia, urged the international community to fund the transition plan and prepare the Somali National Army (SNA) and other national security forces to replace AMISOM to maintain security.

"We need to know when the money that is going to buy the enablers, the multipliers, the barracks, the cars for the SNA is coming," Madeira said.

Prime Minister of Somalia Hassan Ali Khaire said that much had been achieved since December 2017 when the Somalia Security Conference began working on a transition plan to transfer security responsibilities from AMISOM to Somalia's own security forces.

"The transition plan focuses on a number of key elements. First, it stresses local delivery as a key component for success. Second, the plan outlines the necessary supporting activities in recognizing that there is no purely military solution to our problems," Khaire said.