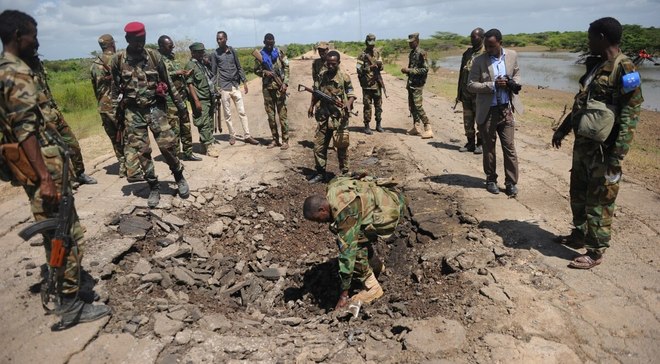 MOGADISHU, Somalia - One Al-Shabaab militant was killed following a US coordinated airstrike at Jilib town, Southern Somalia on Sunday, AFRICOM has said, in the latest onslaught against the Islamist insurgents.

Sunday's airstrike in coordination with the Somali National Army [SNA] was the third in the town within a week in the Al-Shabaab stronghold, AFRICOM added.

Last week, a similar airstrike dismembered an Al-Shabaab compound within Jilib town, although no casualties were reported.

A few days earlier, authorities said, a top militant was killed by the US army in the latest crackdown against the extremist group.

Airstrike the third in Jilib town in 2019

Although details of the casualty are yet to be determined, it's believed that the militant was instrumental in the terror group.

The US military said: "Initial assessment concluded the airstrike killed one (1) terrorist."

Such airstrikes have received vehement condemnation from rights group, who claim that civilians are the most affected in the process.

But AFRICOM added that "we currently assess no civilians were injured or killed as a result of this airstrike."

Local media insisted that the alleged militant killed last week was a "poor farmer" who was inspecting his farm within Jilib town.

Since January this year, the US military has conducted over eight sophisticated operations in Southern Somalia, killing at least ten militants, SONNA reported.

Elimination of terrorists, he added, not only makes the US safer but also enables the military to pile more pressure on the militants to quit their activities

"Removal of even one terrorist makes the region and the U.S. safer. Continuous pressure on the network is necessary to prevent al-Shabaab from building a safe haven and exporting violence," he said.

The US has deployed over 500 servicemen in Somalia whose primary role is to train SNA in a bid to stabilize the region.

U.S. Africa Command, AFRICOM said, will continue to work with its partners to transfer the responsibility for long-term security in Somalia.

Since 2006, Al-Shabaab has leftover 4,000 people across East Africa dead with Somalia bearing the brunt in the tragedies, UN said.

The militants, UN Panel of Experts said, have thrived on "mafia-style' taxation to expand their criminal activities across the Horn of Africa.

In support of the Federal Government of Somalia, U.S. forces will use all effective and appropriate methods to assist in the protection of the Somali people, AFRICOM added.

AFRICOM to learn from mistakes

While addressing the Armed Forces Committee in Senate, he insisted that "The US will give no chance" to the group to thrive in the coming days.

The army general also acknowledged that "we were unprepared during the Manda Airfield attack in Kenya and Al-Shabaab caught us unaware".

During the January 5th raid at Manda Airfield, three Americans among them a serviceman died with at least six aircraft dismembered.

But Al-Shabaab insisted that "we inflicted unbearable casualties on them" in a statement that was dismissed by AFRICOM as "propaganda and conspiracy theories".